Camper Hits Grand Central
For A Look At Fall

What does the Shophound do when H&M invites us to a party celebrating a show we haven't really been watching? We go, because one ting we have learned is that H&M throws an exceptionally good store party. You might not recognize the atrium of the chain's Fifth Avenue flagship in the picture above as it was on Tuesday evening. It was transformed into festive, tropical wonderland where open bars naturally sprout on every floor, and the natives walk around with trays of treats. The party was in honor of NBC's "Fashion Star", the show where contestants create new capsule collections every week and then try to have H&M, Saks Fifth Avenue and Macy's compete to buy them. Sometimes they win big, and sometimes, nobody bids (insert wah-wah sound). From what we can tell, H&M serves as some designers' last hope, since what Saks and Macy's might not find interesting enough for their customers, H&M is happy to sell for $39.95 the day after the show airs. We can't tell if the show is big winner with NBC, but it looks like it was a hit for H&M, which was proudly displaying the items the chain had bought from contestants so far. The event was billed as an "exclusive shopping event" and the store staff was super-extra helpful and ready to hand everyone a mesh shopping tote. Most everyone seemed more interested in drinking, however, or trying to catch some face time with "Fashion Star" judges Nicole Ritchie and John Varvatos who hosted the event. The other name of interest who appeared was androgynous model of the moment, Andrej Pejic who was serving up a lady look for the evening (all pictured below). Pejic has no connection with the show that we know of, and was probably there for the free drinks like everyone else.

It was also a opportunity for H&M to get press folks into the store to see its new Conscious collection of eco-friendly fashion which was being showcased on the main floor amongst the temporary palm fronds. We went wandering around to explore the unlikely possibility that any of the chain's recent Marni collaboration was still hanging around, and upstairs in the men's department, not far from an antipasto bar, we found an abundance of both colors of the collection's hooded lightweight parka as well as the navy coat with knitted sleeves and a few random shirts and trousers. Unfortunately, they were all still at full price ($149 for the coats) but there were enough left to suggest that holding out for the inevitable markdown might be an advisable strategy. 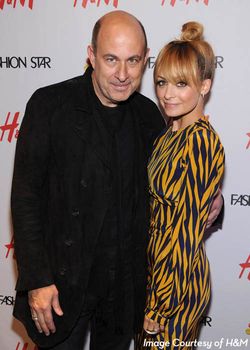 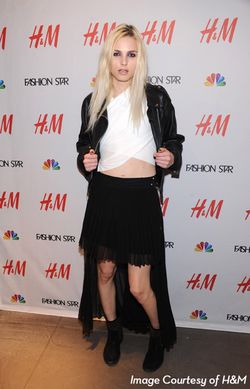