Is Elsa Peretti Fixing
To Split With Tiffany? 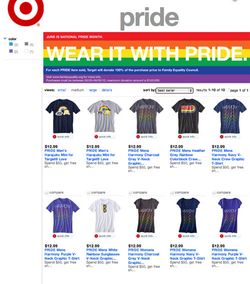 What does it mean when a huge, mass-market retailer like Target adds ten Gay Pride t-shirts to its online offerings? In a year when same-sex marriage continues to be a lightning rod-issue in Presidential and state politics, it says something about progress and attitudes. In fact, voters in target's home state of Minnesota will vote this fall on a state contitutional amendment prohibiting same-se marriage. Are the new product offerings a result of Target's troubles with gay activists a couple of years ago when the retailer was discovered to have donated $150,000 to the MN Forward PAC  supporting Minnesota Republican gubernatorial candidate Tom Emmer, who was known to hold some anti-gay views? Boycotts were threatened. A music deal with Lady Gaga was torpedoed, and the company's generally exemplary reputation for supporting its gay employees with fair and equal benefits was tarnished by the bad publicity.

Target spokeswoman Molly Snyder tells Minneapolis' Star Tribune that the decision to offer the shirts came not from that embarrassing episode, but was generated by the company's 1,200 employee strong LGBTA (lesbian, gay, bisexual, transgender and allies) Business Council. "Over the past year, we heard from our team members and guests that they'd like to see an assortment of Pride merchandise available at Target."

The shirts which became available this week, sell for $12.99 each, and the entire purchase price will be donated to the Boston-based Family Equality Council which is dedicated to supporting lesbian, gay, bisexual, and transgender parents and their families. The assortment includes 10 different styles including one by singer Gwen Stefani, who also sells an exclusive line for children called Harajuku Juniors at the chain. As far as we can tell, the shirts are available only online, not at Target stores, so...baby steps.