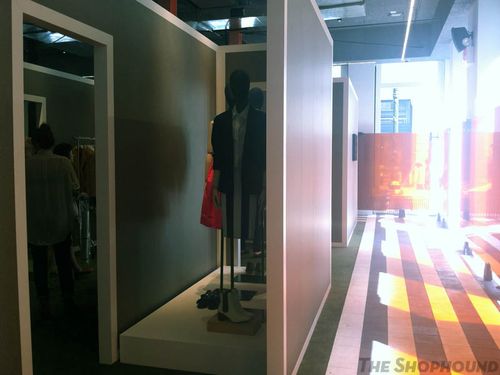 There has always been a kind of blithe perversity about the Swedish brand Acne. When it first appeared on the scene as a denim brand, The Shophound wondered how why a company with such a nice product would name itself after the scourge of pimply faced teenagers all over the world? And yet, the brand has thrived despite the name, and flourished into a full sportswear and lifestyle brand for men and women, a triumph of appealing merchandise over a bewildering name. 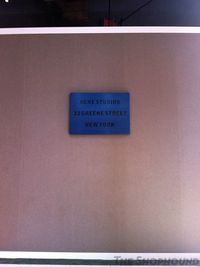 We have gotten so used to seeing the label everywhere, that we almost forgot how weird we thought it was initially, but we were reminded over the weekend when we visited the new Acne Studio store on its opening day this past Saturday. What can you say about a store that greets entering customers with a flat wall (pictured at right)? Disorientation is the theme of this boutique, which has taken what was originally a prized, lofty corner space at Grand and Greene Streets and divided and re-divided it with an elaborate arrangement of partitions and mirrors that keeps customers constantly peering around corners to find merchandise, or maybe just to try and figure out where they are. On the one hand, it's a change from what has become the cliché of SoHo retailing —a big empty space with racks along the walls and an interesting table in the middle— but on the other, it seems clever to a fault, at least to us. Maybe the brand's need to make a unique statement had finally gotten the better of it. At times we felt like the store's interior designer was off chuckling somewhere as customers made their ways through the mazelike shop like mice in a lab. Doesn't this make it a little harder than it needs to be just to find a nice outfit? Was that a fitting area toward the back of the store? Maybe, but then that was also where the wall of jeans could be found. 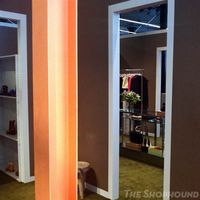 Considering the brand's track record, we are not worried about the store's fate. It's design will probably be just another weird quirk that won't stand in the way of its continuing success, like its name. The merchandise looked as appealing as ever with its typical classically inspired styling with a signature youthful spin, but its environment had the weird effect of making a big airy space feel small and claustrophobic. If that's the latest thing, then we give up.