That Christian Louboutin Men's Store Might Take A While...

New To You Edition

Who Is Sarah Pacini, And What Is She Doing On Bleecker Street? 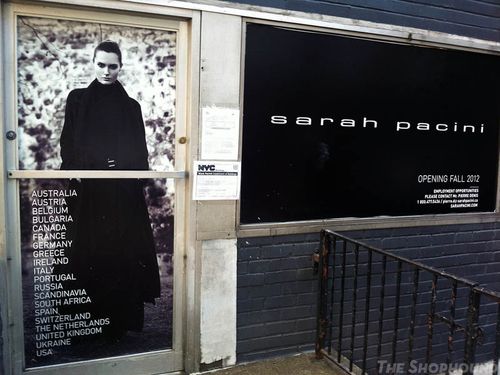 One thing you can say about the many designer arrivals to Blecker Street over the past few years is that we had already heard of most of them before they arrived. From Marc Jacobs to Ralph Lauren to Cynthia Rowley and Lulu Guinness, none of them were was strangers to upscale shoppers. But then, seemingly out of nowhere —well, France, actually, along came sibling brands Sandro and Maje, and now they are to be joined this Fall by Sarah Pacini at 350 Bleecker near West 10th Street, right next to Jean-Michel Cazabat.

Who is this designer, anyway? We have been researching this for most of the afternoon (okay, in between watching Olympic Swimming preliminaries) and from what we can gather, Sarah Pacini isn't specifically a who, but more of a what. Apparently Belgian, the luxury sportswear brand has 53 stores throughout Europe, and two in Montréal. According to the website, this upcoming store will be its first in the United States, and as you might guess from the moody black and white photo covering the upcoming store's door, the look of the brand is sophisticated and sleek with a dash of quirky artsy-ness for interest —this is a Belgian brand after all. It's the kind of look that a certain New York woman can never get enough of at prices that, from what we can tell, hover in that space between contemporary and designer collections that retailers like to call the "gold range". Think Jil Sander and Rick Owens LITE at somewhat gentler prices. It looks like the store will also serve as a U.S. showroom for the brand. It has been carried in a few specialty boutiques around the country, so if it catches on, expect to see it in more stores. Finally, the website describes the line thusly:

For every woman who chooses to be different, who refuses to sacrifice comfort for style, who believes that fashion is the art of life for expressing your true self, there is Sarah Pacini.

Well, who knows what that means? It's your boilerplate fashion blah blah, but if all goes as scheduled, you'll get you chance to form your own opinion sometime this Fall.