Another Look At The Saint Laurent Retro-Rebranding

Why Is Dior Homme's Temporary Store
All The Way Downtown In SoHo? 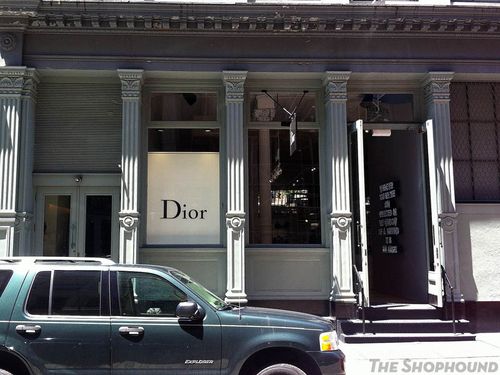 The Shophound had been pretty slow to get to the Dior Homme temporary store in SoHo that will be in operation until the main store on 57th Street has been fully renovated in September. When we finally got there, we were immediately struck by how non-temporary the store looked, at least for SoHo, where exposed ductwork and open, unadulterated spaces are de rigeur. The store actually feels larger than the uptown version and offers the same, complete collection including a few items like jeans and some accessories that appear to date from the label's days with founding designer Hedi Slimane at the helm. What really bewildered us, however was why the temporary replacement for a midtown boutique would be located nearly 60 blocks south?

There's not a lot going on in during the dog days of Summer now that the Menswear and Couture shows are over, so it's a perfect time for random, baseless speculation. What is Dior up to in SoHo?

Typically, designer boutiques, especially in midtown, will open a temporary store during renovations that is nearby so shoppers can easily be redirected. Think of Apple's current temp store on Greene Street, or the 57th Street location just to the west of Bergdorf's that was once a bank and Fortunoff, but more recently has served as a temporary location for Chanel, Burberry, Ferragamo, Coach and a host of other midtown boutiques during their renovations. Why didn't Dior Homme decamp there instead of running the risk of sending its potential customers on a trip downtown that they may not care to take?

We are pretty sure that Dior is testing the waters downtown if not for a full Dior flagship, then possibly for a separate men's store, or for who knows what? Now that Raf Simons is Dior's women's designer, all sorts of new directions might be explored. You will remember that as creative director at Jil Sander, he placed the brand's new flagship on a quiet corner at Crosby and Howard streets after that label's 57th Street home was turned over to Miu Miu. The bold location switch signified Simon's point of view and personal preference, and while there's no chance that Dior's flagship will be moved from 57th Street's LVMH tower, We wouldn't be surprised to see Simons push for a downtown counterpart that better reflected his own sensibilities. His debut Couture line showed that he is clearly looking to forge a new creative path for the house. Here's some more baseless speculation: We are guessing that as soon as designer Kris Van Assche's contract at Dior Homme runs out that Simons will take over that label as well. After all, his initial success was in menswear, and  the change would unify creative direction for the entire brand under one person much like it is at LVMH sister brand Givenchy and other luxury labels like Gucci, Prada and Saint Laurent —yes, the newly retro-branded Saint Laurent which eventually will have a permanent home on Mercer Street sometime next year, and is coincidentally also undergoing something of a brand overhaul under the former Dior Homme designer Slimane, who has to be considered at least something of a rival.

So is that enough to ponder on a Summer Monday afternoon? Are we overthinking, or is Dior already way ahead of us?