And Here Is Your Monumental
David Beckham Statue

Man Of Many Lines, Thom Browne Goes Grey For A Capsule Collection 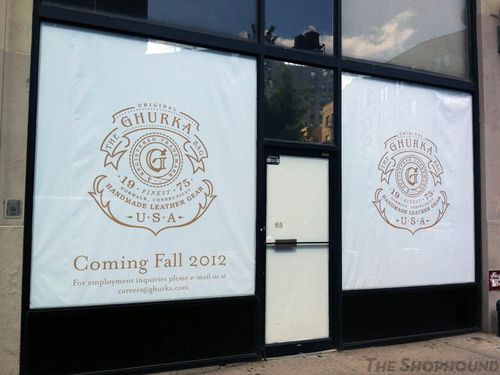 It hasn't even been a year since Ghurka was rescued from a corporate owner, but a strong revival is already in full swing. While the brand has had a New York boutique for some time, in recent years it went from Madison Avenue to the black hole unfortunate underground spot in what was once the Plaza Hotel's "Retail Collection", and finally to a much more favorable location just off Fifth Avenue on 59th Street in the Sherry-Netherland Hotel at the beginning of this year. This October, however, the Connecticut-based leathergoods brand will open an additional 1,000 square foot store at 65 Prince Street in bustling SoHo that will serve as a flagship store as the brand upgrades and updates.

Also on deck for the 37-year-old brand this Fall is a return to key retailers like Nordstrom and Bergdorf Goodman, a revamped website and exclusive pieces for Gilt Group's Park & Bond luxury men's web retailer. Ghurka has revamped its product line by refocusing on the classic men's accessory items that initially made it successful, re-interpreting them in new colors and materials. Though previous owners allowed the brand to recede from the exclusive spotlight it had previously enjoyed, the brand is now poised to raise its profile to compete with accessory mainstays like Cole-Haan and Coach. If that's the case, it will be refreshing to see an American accessory brand succeed by actually manufacturing its products in America.

Ghurka Gets Aggressive for Fall (WWD)
Previously:
Accessory Upgrade: Ghurka Shows Off A New Look In A New Store (1/23/2012)