Here's Where Anya Hindmarch's
New Boutique Will Be

DÉJA VU ALL OVER AGAIN:

Is Anyone Ready For The Revival Of Rudi Gernreich? 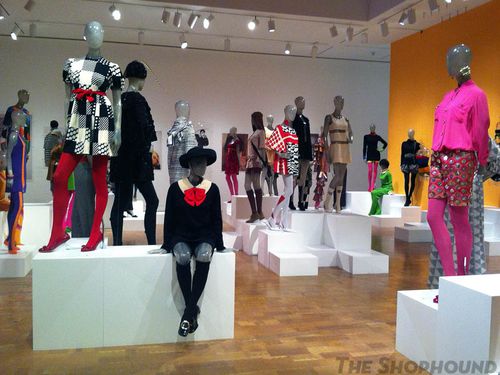 Have you heard of Rudi Gernreich?
If you are reading this blog, then you probably have. If you visited the recent exhibition, The Total Look: The Creative Collaboration Between Rudi Gernreich, Peggy Moffitt, and William Claxton at the Museum of Contemporary Art in Los Angeles as The Shophound did (pictured above), then you have (the show is currently at the Savannah College of Art and Design Museum of Art in Savannah, Georgia). If you are a fan of iconic sixties fashion, then you should be familiar, but is the general, fashion buying public cognizant enough of Rudi Gernreich and his significance to be excited that the label (last produced commercially in 1968) is set to return to the racks of stores?

WWD reports that a mysterious backer believed to be a German entrepreneur has acquired the necessary trademarks to get a Gernreich collection on the runway by 2014. There are few other specific details, but as we watch yet another mining of fashion's past, let's of think of some of the other dormant designer brands that people have tried to bring back in recent years.

Vionnet has been successfully revived since 2006 as a niche designer luxury brand, but in the past six years it has burned through three well regarded designers, Sophia Kokosalaki, Marc Audibet and Rodolfo Paglialunga. Currently it is designed by sisters Barbara and Lucia Croce. We'll call it a success, but the jury is still out as to how big or consistent. Currently it is controlled by Matteo Marzotto of the famous Italian textile family, so there is solid backing.
UPDATE: It turns out that the Croce sisters have also "interrupted" their collaboration at Vionnet and will take no bows when the Spring 2013 collection is shown in in Paris. The label’s new London-based owner, Goga Ashkenazi has taken control of the brand.

Vionnet's contemporary, Schaparelli is set to be revived by Diego Della Valle, owner of Tods who also can be seen as a solid backer, While he has hired various other staff, there is still no designer attached to the label, so again, jury is out. Despite the recent Costume Institute show pairing designer Elsa Schiaparelli with Miuccia Prada, the label has not been in the marketplace since 1954, and public awareness of the designer is believed to be low.

Biba, a swinging London counterpart to Gernreich was also revived in 2006, but failed. Now it is an in-house label at the British department store House of Fraser.

An attempt was made to revive the iconic American label Norell in 2004 that apparently went nowhere after one show at the John Barrett hair salon at Bergdorf Goodman. Bergdorf's declined to buy the collection.

Bill Blass, which has only just become dormant, has ultimately fizzled after a string of designers attempted to keep it alive following the designers' retirement and death.

Then there's Halston, which people have been trying to restore to its glory days status since the mid-'90s. Even movie mogul Harvey Weinstein has had to admit defeat here, leaving only a contemporary priced "Heritage" dress label to carry the illustrious name despite cycling through numerous designers and hopeful runway shows in attempts to re-create the luxury brand.

So good luck to you, anonymous German entrepreneur. We hope you can hire a designer who is at least half as creative as Rudi Gernreich was. Having seen the show in L.A., we might suggest just re-issuing some of the designer's originals, as Comme des Garçons did in 2003 in collaboration with Moffitt, the designer's primary model, muse and, now, archivist. His clothes look remarkably fresh and relevant today. At a certain point, though, we have to wonder why, instead of investing money in a label with a heavy legacy that few of its potential future customers may even be aware of, this mysterious backer doesn't just find a talented young designer to launch under his or her own name? Too simple?