What Has Put The Black Fleece Store On Bleecker Street Out Of Commission? 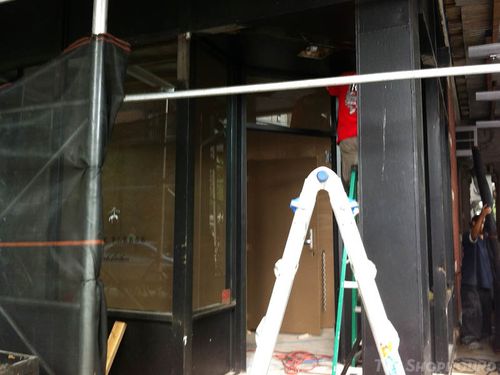 It was just this past Saturday that The Shophound was browsing through the Black Fleece store on the corner of Bleecker and West 10th Street, admiring the first arrivals from Thom Browne's Fall collection for the Brooks Brothers label (one of his best, so far, in out marginally humble opinion). When we walked past it yesterday, on our way to check out the just opened MM⑥ store (more on that later on), we discovered the space to be under some kind of elaborate construction that included building some kind of protective plywood around the interior of the store. We can't figure out what's going on here. When we peered through the side window (at right), we could see that the store's furnishings were still in place, albeit covered in protective materials, so it doesn't look like the store is shutting down or moving. Hopefully, the store will simply be on a brief hiatus. There are only two dedicated Black Fleece in the world (the other is in San Francisco), so we would hate to lose one of them. Of course, if Brooks Brothers is looking for some temporary space for the brand, there's a hastily vacated Rugby shop just down the street that could probably do in a pinch.