DÉJA VU ALL OVER AGAIN:

Is Anyone Ready For The Revival Of Rudi Gernreich?

MAKE OF THIS WHAT YOU WILL:

Minnie Mouse & Daisy Duck Getting Makeovers For Christmas At Barneys

Here's Where Anya Hindmarch's
New Boutique Will Be 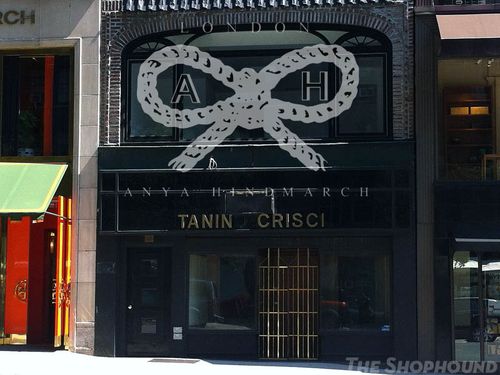 It seemed at one point that the Italian shoe maker Tanino Crisci had settled in its elegant but extra-conservative niche on MAdison Avenue as a permanent fixture, but then the company up and shut down a while back and its store has been empty ever since —but not for too much longer. Early next year, the covetable space at 795 Madison Avenue between 66th and 67th streets will switch from shoes to hadbags as London based Anya Hindmarch moves her boutique a few blocks uptown from its current spot on East 60th Street. This would be a smart upgrade in any case, but the move is only a part of a larger strategy to vault the 25-year old label to the next level of luxury players amongst the Célines, Miu Mius and Bottega Venetas of the world. To that end, designer Hindmarch has hired former Balenciaga CEO James MacArthur to run things allowing her to focus all her energies on the brand's creative direction. While Anya Hindmarch has quietly built a loyal following for her bags over the years, she has done so with typical British reserve, but look for the label to have a higher profile going forward. If all goes as planned the new store will add some extra luster to the brand poised for its next phase.