Black Fleece's Bleecker Street Facelift To Be Finished By This Saturday Last week, we pondered what could possibly be the reason for Brooks Brothers' Black Fleece store on Bleecker Street to be abruptly shut down. It turns out that the the store is in no danger of an extended renovation. The building is simply getting a new look in keeping with Landmark Preservation standards according to the notices that have been posted on the plywood but mostly obscured from view by protective construction materials (above). Looking at the previous exterior (pictured below), it is clear that the otherwise charming corner store, like many of New York City's structures from early in the last century, has lost some, or more likely most, of its original decorative detailing, leaving only hints of its original look. It's actually kind of dingy looking if you examine it for too long. Presumably, the exterior will be restored to its former glory by this weekend, so shoppers will only have been without the store for barely a couple of weeks during the dog days of August. What a well timed couple of weeks off it must be for the store staff. The shop is set to reopen this Saturday, so we look forward to checking out its new, historically correct upgrade.

Previously:
What Has Put The Black Fleece Store On Bleecker Street Out Of Commission? 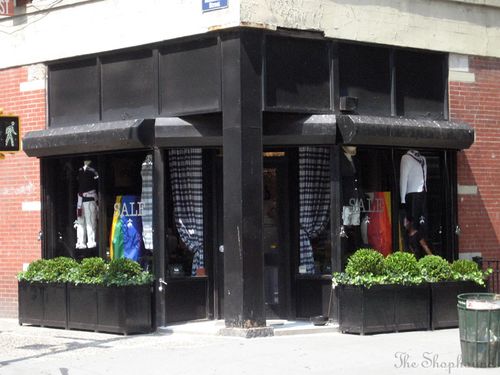