A Rainbow Of Legs From HUE 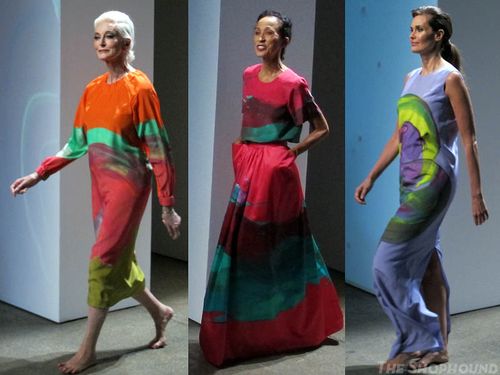 The Shophound knew that Marimekko's runway show yesterday afternoon would be a little extra special when we got the invitation in the mail, packaged in its own little Marimekko print pouch. So far as we know, the famous Finnish textile and print company has never held a fashion show in New York, so this would be a special event of a sort to begin with. In many ways, the show was exactly what we expected —in a good way, with happy smiling models in easy sportswear made from the company's inimitable printed fabrics, but the  we heard an extra cheer from the photographer's riser, and we realized that 81 year-old supermodel Carmen Dell'Orefice was on the runway. Applause rippled through the audience, and as happy as people were to see her, she looked even more thrilled to be seen, adding a few extra flourishes and and a bit of playful mugging to her first turn on the catwalk. A few more exits later, there were more cheers, this time for the original Halstonette, Pat Cleveland and her inimitable runway sashay, and then, after a couple more looks, '80s icon Carol Alt took her turn in the spotlight for more applause. Each model soaked up the attention and beamed it back to their audience, acknowledging that their little moments on the runway were indeed all about them, and a recognition of their resilience over the decades. By her second look, Carmen practically danced her way down the runway, but then she was having a pretty special day herself having already been profiled on the "Today" show only a few hours earlier. In almost any other show, such a departure from the current zombie-like runway style would be seen as atrocious form. Any kind of preening or recognition of the audience in anyway, would be seen as an unprofessional distraction, but not at Marimekko, where even the non-superstar models were directed to be cheery and upbeat. It's perfectly on-brand for the company whose signature prints couldn't be brighter or more optimistic, and of course the appearance of the three veteran models underscored its timeless, ageless appeal. Marimekko managed to inject a welcome lack of pretension into New York Fashion Week, an event that always threatens to crumble under its own self importance. In another departure from current fashion show protocol, the show's PR staffers made sure that every attendee left with the same multicolor, geometric printed tote bag that seated guests found under their benches, and offered them with a smile and thanks. Call it Scandinavian egalitarianism, if you want, but it's the kind of common courtesy that has become all too rare during New York Fashion Week, when even seated guests sometimes don't receive a simple run of show. Let's hope Marimekko makes a habit of showing its collection in New York. Everyone else could learn a little from their example in so may ways.