Why The GQ's SoHo Pop-Up Store Is Important For Nordstrom 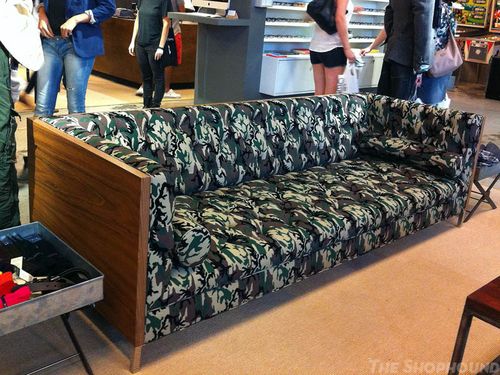 Above, you can see the camouflage-covered couch that sits at the center of the GQ & Nordstrom Pop-Up shop that has taken up residence at SoHo's Treasure & Bond store through this coming Sunday. Without showing any actual merchandise, this piece of furniture tells you almost everything you need to know about the store, It is a tribute to that guy (or, more likely fashion editor) for whom there can never be enough camouflage print. It's that raw-denim-heritage-brand-longwing-brogue-stack-of-bracelets-double-monkstrap-shoe-sprezzatura-worshipping guy who has captivated the American menswear culture. It's the guy who loves anything authentically American, but loves it more if it comes by way of Tokyo or Milan.  It is, in many ways, like a current issue of GQ encapsulated in retail form, brought to life by Nordstrom. What it doesn't look like is Nordstrom's men's department —but that appears to be changing. People who know Nordstrom know that it has one of the largest upscale menswear businesses in the retail industry. It has nearly three times the number of locations as Neiman Marcus or Saks Fifth Avenue, and menswear vendors who sell to Nordstrom will tell you that it is their biggest account by far. What Nordstrom hasn't had, however is a strong fashion image for its men's department. For decades, the direction there has been classic and conservative, and that has been extremely lucrative, but, in case you haven't heard, Nordstrom is coming to New York in a few years, and what plays as traditional in much of the rest of America can come off as bland in New York where Nordstrom aims to compete with Saks, Barneys and Bloomingdale's more than Lord & Taylor and Macy's.

Nordstrom has always had a strong women's designer business in it's top-ranking locations, which it bolstered seven years ago by buying the boutique Jeffrey and making the shop's former owner Jeffrey Kalinsky its chief merchant for men's and women's designer merchandise. Kalinsky seems to have mostly concerned himself with the women's side of the business, but a year ago, the Seattle based store hired former Bergdorf Goodman Men's Fashion Director and President of Simon Spurr, Tommy Fazio. This pop-up store and the company's recent partnership with GQ can be seen as a result of Fazio's presence in the company, and perhaps a glimpse of a more fashion-forward Nordstrom men's business of the future. 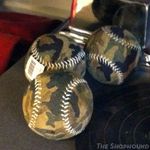 The Shophound's recent visits to a couple of high-profile Nordstrom branches has seen the addition of some designer labels like Dolce & Gabbana and Rag & Bone for men that have not been seen in the store in the past and don't yet blend in so easily with the rest of its relatively conservative men's department, but the pop-up store pulls together the kind brands that can bridge that gap between traditional and stylish. Taking advantage of a fashion moment in menswear that is centered around new interpretations of classic American style, Nordstrom has an opportunity to lure in the kind of customer who might have thought the store was a little too conservative for his taste. To that end, and with GQ's guidance, this shop has been filled with a mix of heritage brands and designers like Michael Bastian, in both his main and Gant labels and Todd Snyder as well as specialty lines beloved by fashion insiders like Warby Parker eyewear and Miansai bracelets. There are shoes aplenty —this is a Nordstrom project, after all, and lots and lots of camo. There are even some camouflage patterned baseballs. When the Shophound stopped by last Friday afternoon, the store was buzzing with customers, so when Nordstrom finally opens on West 57th Street in 2018, don't be surprised to see a camouflage couch in the middle of the men's department. 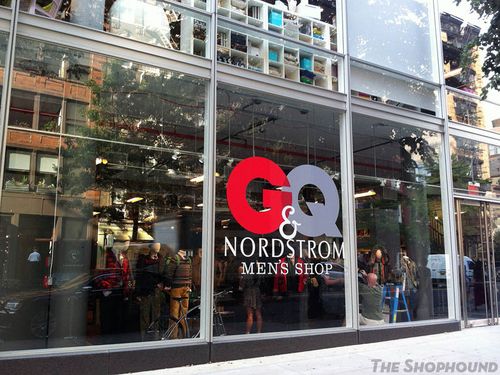