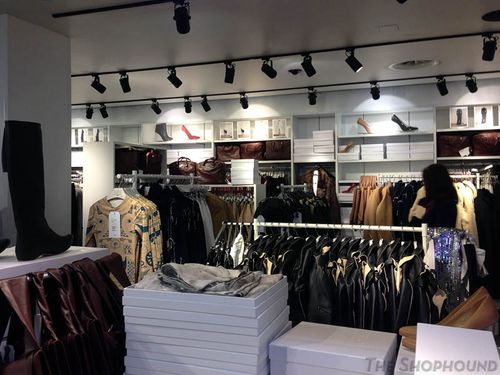 Sorry you missed last Thursday's launch of H&M's collaboration with Maison Martin Margiela? Don't assume that it's all gone. Quite the contrary, In fact. For the past few of the Swedish fast-fashion's designer team-up's The Shophound has been quite grateful to be invited to the press-pre-shop events the night before the big launch, allowing us to trade the early morning wait in line and subsequent mad frenzy for a more exclusive early evening wait in line and a marginally less mad frenzy that comes with cocktails and hors d'oeuvres plus the occasional odd celebrity (This time it was actress and superstar spawn Tracee Ellis Ross and fashion personage Michelle Violy Harper). Mainly, we appreciate getting the pick of the merchandise before anything gets sold out. As we write this on Saturday, two days later, we are just coming from a visit to the H&M flagship on Fifth Avenue to see what was left from Thursday's launch, and as you can see from the picture above, what was left was pretty much everything. We stopped by the new Columbus Circle branch on our way home and found much the same scene. This is almost unheard of for H&M's collaborations. As an H&M staffer told us, by the end of the day after the Versace collaboration launched, there was barely a stitch of the collection left for anyone.

There could be several reasons for this particular state of affairs, and we are not willing to assume that customers were just not intersted in the Margiela line. One possibility is that H&M wanted there to be more opportunity for people to come in and buy the line instead of the typical gone-in-a-flash, one-day-only shelf life of these events. They may have deliberately shipped more merchandise so it would be available for longer. After all, this is the first time the chain has distributed the collaboration line to every Manhattan H&M store instead of just a select few. A company spokesperson told WWD, which reported lighter turnout for the launch, that they were selling the line as expected and deliberately expanded distribution to allow more people to sidcover it. That fits with our optimistic assessment of the situation.

There is also the possibility that Martin Margiela was a little too cool for the room. Past collections with Lanvin and Versace were sellouts, but then, they were also much more accessible in style, with lots of glamorous dresses. Even quirky Marni found an enthusiastic customer, but the Margiela brand has always had a peculiar aesthetic, forgoing labels featuring the designer's name, and often presenting and selling the line in bizarre, surrealist-inspired environments. This is the brand of a designer who to this day has refused to allow himself to be photographed, and most of his fans still have no idea what he looks like. They do know that he, and the team that has succeeded him routinely mix avant-garde items with fairly conventional and easy to understand pieces, but that may be a tough concept to put over to H&M's customers in one capsule collection that traces reproduced items from the label's archives. Of course, Comme des Garçons is no less avant-garde and sometimes even more bewildering, and that label's H&M collection from a couple of years ago was, as far as we can tell, considered a success. We aren't teribly surprised to see plenty of the sideways skewed $199 "Horizontal" dresses left, but many of the more conventionally styled pieces are still around as well.

The third possibility may be that this time the line may have just gotten too expensive with the priciest items nearly hitting the $400 line. We must note that this collaboration has been exceptionally successful in reproducing the unusual details, quality and unique fabric treatments that Margiela fans will immediately recognize. We have always suspected that these designer collaborations may be something of a loss leader, or at least a break-even proposition created to draw new customers to H&M as well as generate huge amounts of publicity, but we were still impressed with the way the chain managed to sell the collection for a fraction of Margiela's usual price tags. A fraction of the designer's very high prices, however is not necessarily that cheap. We noticed that the bulk of the line was priced at $99 or higher. The beautifully made men's coat for $249 may have been a bit too rich for H&M where its own merchandise is about half that price and less. Leathers and special pieces went higher. We were really impressed by the impeccable construction of the plexi-heeled pump (and all of the shoes in general), but $299 may be more than a splurge for H&M's customers. The men's chelsea boot at the same price is virtually identical to a style currently available at Mr. Porter for $865, but in the end, it's still a pair of $299 boots, and you can either afford them or you can't.

We still think that it's a great collaboration collection (and we sure have seen a lot of them lately), and as not much of a Margiela wearer in the past, we really love the pieces that we got for ourself. The big plus of there being a lot of this line left is that, possibly, sometime in the future, it may get marked down. If any of the above reasons kept you from getting some Margiela x H&M for yourself, you may get another chance to get it if you are patient and sharp-eyed.