GETTING AHEAD OF YOURSELF: 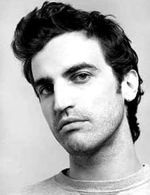 So you thought everything in the Paris fashion world was settled.
Fat chance.
Today's surprise is that Nicolas Ghesquière, the designer who catapulted Balenciaga from a faded, formerly exalted Haute Couture house to the forefront of international fashion, is leaving his post. In a public statement, the designer and his soon to be former employer refer to a “joint decision to end their working relationship”.

And that's all we know for now. There's no word on who will replace him, but he will be a tough act for anyone to follow. It is believed that when Balenciaga was purchased by the then Gucci Group which became part of current owner PPR, Ghesquière was included in on the deal as a key figure with an equity incentive to remain at the label.

There is no information on the designer's future plans, and all we know for sure is that Balenciaga's sure to be lavish upcoming boutique on Mercer Street in SoHo will open with his final collection for the label.