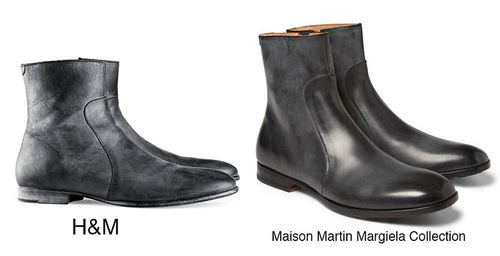 For its most widely distributed "guest designer" collection ever, some say H&M went too esoteric and too expensive by teaming up with Maison Martin Margiela to launch a capsule collection of replicated items form the house's archives.

Well, it's all still just as weird looking, but now it's a lot less cheaper.
This weekend, H&M took an axe to the price tags of the collection, bringing the cost of an outfit closer to what one might expect to pay at the fast fashion chain. We stopped by the new Columbus Circle branch and found most of what we had bought at the launch marked down from half to two thirds off.
Damn.
There still seems to be a great deal left, and the prices are great. Pretty much all of the shoes that are left (which means all of them except for the sneakers) are now $99, down from $199 and $299 which made it an excellent time to pick up a pair of the men's Mould Effect boots pictured above which are almost indistinguishable from the pair currently on sale at Bergdorf's and on Mr. Porter for around $600 save for a touch of rubber tread on the soles (Obviously there are some quality differences, but they make a pretty damn good knock-off). In fact, we saw little over $99 in the entire collection, including the big, camel colored coat, and many other key items for men and women. We also noticed that aside form the line's designated areas, pieces were also mixed into stock throughout the store, so it's worthwhile to keep a sharp eye out if you are going to give the line another shot at better prices. H&M likes to turn their merchandise quickly as a rule, and this line is now priced to sell, so if you are interested, now really is the time.

Previously:
There Is A LOT Of Maison Martin Margiela With H&M Left To Buy