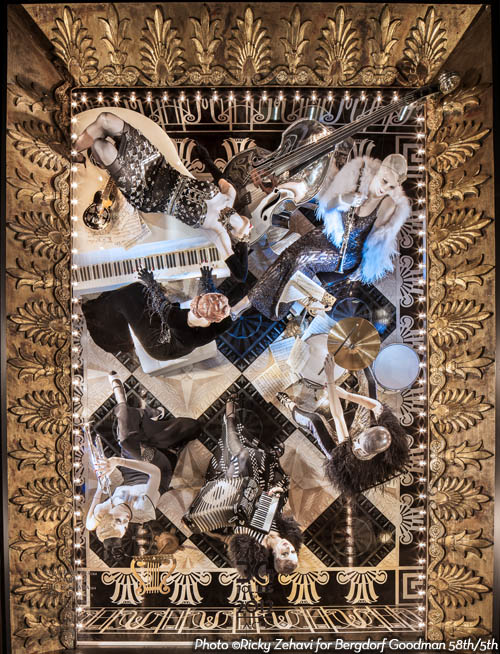 Is there any other city like New York when it comes to Christmas windows? Between Saks Fifth Avenue, Lord & Taylor, Bloomingdale's and Macy's among others, what city has such a high concentration of  flagship stores with the kind of huge, continuous display windows that lend themselves to to these kinds of seasonal indulgences? While most of theses stores usually design their displays to entertain the whole family (and by that we mean kids), Two of them have always made a point of decorating with a little more sophistication. When Barneys was downtown on 17th Street and Seventh Avenue, then creative director Simon Doonan helped make the store's name with wickedly parodic windows that frequently skewered celebrities and events of the day. In recent years, Bergdorf Goodman has turned away from classic, holiday themes in favor of lavishly constructed fantasy themes that seem to get more intricate each year in its Fifth Avenue windows. Neither store has ever felt the need to offer something for everyone, and both know that their customers (many of whom they share) demand things that are just a bit different.

This year, Bergdorf's has picked a Jazz Age theme, "The BG Follies"for its five big Fifth Avenue windows this year. To a certain extent, the store and its Visual Director David Hoey generally take an "If it ain't broke don't fix it" attitude, using (and often re-using) design elements in abundance to make the most lavish display imaginable. Minimalist, they are not. In fact they are so crammed with objects and figures and decor that you could stare at them for hours, gazing at the lovingly crafted details. Pictured above is window #1, entitled "By Request", tribute of sorts to the all-girl band in Some Like It Hot. It makes use of a bird's-eye-view effect that has become something of a signature for the store. Repeating this element so often might seem a little less than original, but at this point, Bergdorf's Holiday windows are like a delicious cake that you only get to eat once a year. The familiarity is part of the pleasure. It would be disappointing if Naeem Khan didn't make a glittering custom designed gown for the windows as he has taken to doing in recent years, and this year he made two. Even better. You can see much better pictures than we could take of the rest of the windows at the store's blog 58th at Fifth HERE.

While Bergdorf's is sticking to its tradition, Barneys is in the protracted process of finding exactly what its image is going to be for the future. The management team that has directed the store for the past couple of years has tirelessly worked to remake nearly every aspect of the store's personality including a renovation of the flagship that seems timely on the one hand but also exceedingly ruthless on the other. The store's quirky but luxurious and sophisticated style ("Taste! Luxury! Humor!), honed over decades in great part by Mr. Doonan and a longstanding creative team, has been abandoned in favor of a slicker, more editorial point of view. Like a magazine, the store is now more likely to define itself by joining with other, unrelated personalities like Daphne Guinness, Carine Roitfeld and last year's Holiday promotion star, Lady Gaga. This time they went with Disney, collaborating on a heavily publicized short cartoon called Electric Holiday featuring Minnie Mouse dreaming herself into a Paris runway show and costarring a who's who of real life fashion figures (including Ms. Guinness, Gaga and Ms. Roitfeld among many others) transformed into Disney versions of themselves (watch it after the jump). There has been something of an outcry against Minnie Mouse's runway alter ego, who is stretched out to impossibly thin and out of character runway proportions to fit into her Lanvin dress, an effect that is bestowed on several other Disney figures thanks to an ill advised Tinkerbell and some fairy dust. It turns out that the complaints are justified. Despite composer Michael Giacchino's jazzy score, there is nothing less charming than seeing lively Disney characters sapped of their personalities as they clomp down a cartoon runway serving blank, state of the art runway model bitchface. The only one who looks at home is Cruella de Vil, so make of that what you will. Of course the other disappointment is that Barneys appears to have sunk their entire effort into this cartoon which means that instead of actual window displays, they have four big video screens on Madison Avenue playing the cartoon short. Walk into the store, and you would barely be able to tell that it is the Holiday season as well. Aside from a few not especially compelling light installations, what passes for Christmas decorations in the store is a mural sized black and white drawing of the celebrities who appear in the cartoon that is reproduced throughout the store. If you didn't know what it was, you would just think it was a big caricature drawing with nothing to do with the season. By contrast, Bergdorf's has repurposed it's interior decorations from last year, not uncommon among stores, or many homes, actually, but they are still arresting and evocative, featuring garlands of silver branches with swans and peacocks all over the store's already lavish main floor. There's no missing that the store is decorated for a special occasion.

So what we have one store that knows exactly who it is and finds a way to delight if not always surprise, and another that still hasn't managed to find a new direction that lives up to the original and unique on it has abandoned. Guess which one we are enjoying more?