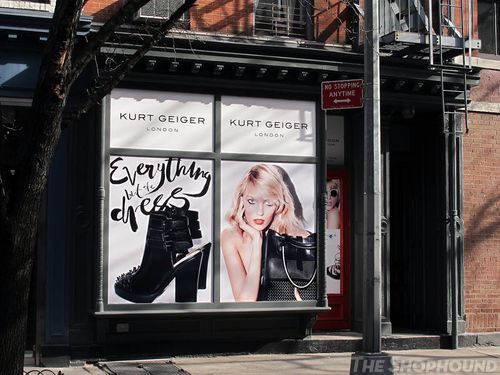 When one of Tommy Hilfiger's more recent attempts at trading up fizzled, it left a particularly charming storefront at 375 Bleecker Street available. It spent some time last year as a temporary launch pad for Karl Lagerfeld's latest diffusion line, and recent walks past the location have revealed that it will soon be the permanent home to British shoe band Kurt Geiger. Not unlike the Duchess of Cambridge's favorite L.K. Bennett, the brand is upscale but not irrationally expensive, so it makes sense to find it there as more and more contemporary labels find their way to the West Village. This will be Kurt Geiger's third U.S. store after units in Costa Mesa and San Francisco, California opened last year, with many more reported to follow. What took the venerable English brand (which will turn 50 this year)  to long to come to America? We're guessing that it has something to the fact that it was purchased in 2011 by the American apparel conglomerate now known as The Jones Group. After all, why would an American corporation want to own a big overseas brand without taking advantage of the huge market at home? Of course, importing a popular brand from across the Atlantic is not always a home run. The Shophound can think of other ambitious imports that failed to crack the American consumer's taste, but trendy shoes and accessories hardly seem like a tough sell these days. We have no opening date for Kurt Geiger yet, but it has started advertising for staff, so we are guessing it will be open well in advance of Spring.