Could SoHo's Sidewalks Get Unclogged? 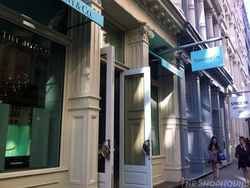 While SoHo continues become an ever greater and more sprawling shopping district, anyone can tell you that the sidewalks have become increasingly frustrating to navigate. While retailers see crowds of shoppers, whether they be tourists or locals, as good for business, they draw ever more street vendors that compound the problem of getting around, but there may be some relief in sight. Last week, Manhattan's Community Board 2 which includes SoHo passed a resolution asking Mayor Bloomberg to reconsider the confusing rules and regulations that govern street vending on Broadway between East Houston and Canal Streets, the neighborhood's busiest thoroughfare. The board has requested that the mayor re-convene a Street Vendor Review Panel for the first time since 2001. DNAinfo reports that trash, traffic and general safety have become overwhelming concerns for SoHo residents, and that both vendors, police and other regulators are unclear about the actual rules for sidewalk vending, making violations difficult to recognize and report, let alone prosecute. A spokesperson for the Street Vendor Project at the Urban Justice Center calls vendors a "vital part of New York" and insists that vendors enhance the sopping experience, but anyone walking anywhere in SoHo on a busy Saturday knows that navigating vendors, slack jawed tourists and the inevitable stretches of sidewalk further constrained by scaffolding can be an aggravating experience at best.

Of course, the community board's resolution only covers the one stretch of Broadway where sidewalks are still relatively wide. It can be argued that it is the side streets like Prince and Spring Streets between Broadway and West Broadway that are even more challenging. There, vendors regularly leave room for little more than a single pedestrian to pass at a time. Limiting vendors on Broadway could push them to crowd the side streets even further, but perhaps we should just address one traffic problem at a time.