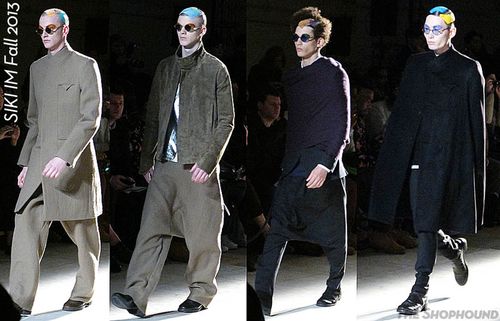 Fashion Week is officially over, and one of the discussions it sparked was talk of a separate week for men's designer shows in New York —something this city hasn't scheduled in over a decade and a half. The main argument (one The Shophound has supported since we started attending Fashion Week shows as a blogger) is that men's designers are hopelessly eclipsed when they have to share time and space with women's collections. One such designer who would benefit from the proposed arrangement is SIKI IM, whose collections we have been following for the past couple of years. A former Ecco Domani Fashion Foundation honoree, he falls on the avant garde end of New York menswear, but his show this past week proved that fashion is starting to catch up with his architecturally inspired aesthetic. At the very least, he has proved to be adept at the kind of showmanship New York demands of an original thinker. This season he chose to show in the Café Rouge, a decaying, disused ballroom in the Hotel Pennsylvania (which Michael Bastian also used later in the day), that featured crumbling, embellished walls and peeling linoleum floors. Add some benches and moody lighting and voilà! Here's a perfect fashion show venue —evocative enough for a collection inspired by Italo Calvino's novel "If On A Winter's Night A Traveller". Im's mix of classic tailoring and softer draping is making inroads as an alternative to the overwhelming crush of heritage and vintage looks that have dominated menswear for the past few seasons. if you are getting accustomed to seeing baggy, low crotch pants, Siki Im raises the stakes by making them in shining silver metallic leather. Demonstrating a foot firmly planted in the practical world, the designer left leather iPhone5 cases by Adopted as gifts for showgoers —which just happened to be something The Shophound needed.

A few hours later, we made our way to the Highline Stages for DUCKIE BROWN's second collection for PERRY ELLIS. Last season, their first effort for the label showed great promise for the collaboration. Coming off one of their best shows for their own label, designers Daniel Silver and Steven Cox offered a tightly edited, more subdued show for the Perry Ellis label, though it probably has more commercial potential with easy caramel colored leather baseball bomber jackets and rich paisley and camo prints. We have been anxious to see the product of this collaboration in stores, but now that it is mid-February, we have not been able to find a single retail outlet for the Spring collection. Even the Perry Ellis website shows not a mention of the collection which is aimed at a more upscale market than the regular, more moderate Perry Ellis brand. We are hoping that, like some Ellis runway collections of past years, that this collaboration is not just a project meant to attract press attention for the brand. Hopefully, customers will get a chance to weigh in on the collaboration soon.