The Shophound said we would be having a light Fashion Week this season, and we have to say we don't regret reducing our schedule one bit. There was a time when we would happily squeeze into any show that would have us, but after a while we realized that we were exhausting ourselves with excess visual stimuli and just too much damn trudging around town. Still, we would hate to ignore Fashion Week entirely, and if we could only go to one runway show, it would probably be CHADO RALPH RUCCI.

Even though Rucci has returned to the big tent at Mercedes-Benz Fashion Week after the occasional, smaller showroom show, there's a different atmosphere. The celebrities there are also real clients like Martha Stewart who buy their Chado dresses and don't need to be loaned something to sit in the front row. In fact, the show is full of clients wearing the label not necessarily to pay tribute to the designer, but because they wear it all the time.

The other reason why Ralph Rucci is worth going out of our way for is because, as a genuine couturier, he really doesn't much care what the trends are, what other designers are doing or what the press is hoping to see. Call him New York's honey badger. He has his own concerns as a designer and they center around continually refining his rarefied techniques. The show he presented on Sunday night displayed his efforts to make his line younger, softer and lighter, but that didn't mean he skimped on the richness he has become known for. the emblematic moment came early on when he sent five models in a row down the runway in brightly dyed, inventively sculptured mink coats and jackets. There was more bright color and glitter to follow, which made it a highlight in a season marked by tough, gloomy looks, and we aren't talking about the weather. At the end, like clockwork, the audience leapt to their feet as they always do for Rucci. 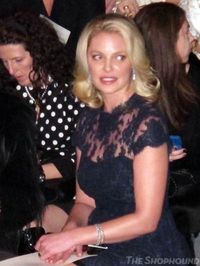 On Monday evening, we hit REEM ACRA's show, and in a season that has been thankfully light on pseudo celebrity frenzy, the pre-show runway paparazzi  suddenly went berserk as a statuesque blonde appeared. Here was Katherine Heigl, the actress who somehow earned the ire of the internet for making a critical comment about "Knocked Up" the film that made her a movie star, and subsequently leaving the cast of "Gray's Anatomy". "That's random, " commented the woman sitting next to The Shophound. Despite other successful films, and no real scandals, this actress is officially known as The Worst in some corners of the blogosphere, which was hard to square with the very pretty lady we saw a couple of yards away who never stopped smiling.

By all reports she was gracious to every fan who came up to her, and a quick check of the IMDB showed that she has a movie with Robert DeNiro and Diane Keaton coming out sometime soon. So that's what she was doing there, aside from snatching the spotlight from Tinsley Mortimer two seats away who looked displeased. Acra's immaculate eveningwear was a perfect match for Heigl, who if we didn't mention it before is tall. Stars -they aren't just like us after all. There were subtle Asian influences that added an edge to Acra's inherent elegance, and of course, a lot of eye popping beading. 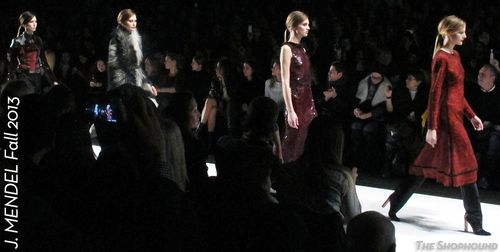 Then, yesterday at J.MENDEL, Heigl again! Now we realize that this is one smart lady. In a lackluster season for front row wattage, she gets maximum PR value. We can respect that kind of savvy. She was next to Jena Malone, a perfectly respectable young actress who is going to be a lot more famous as soon as the "Hunger Games" sequel comes out. At Mendel, there was (no surprise) tons of fur. If you don't have problems with that you would be able to appreciate the impressive ways that designer Gilles Mendel is able to work his materials. In a not to a season filled with tough edged, biker elements, Mendel worked mink with intricately worked leathers and a few heavy zippers here and there. Eventually, they gave way to the glamorous eveningwear the label has recently become most well known for, as Heigl and Malone surely made notes for their upcoming premieres. 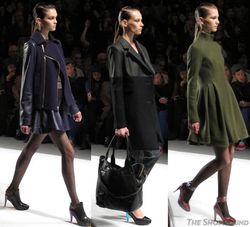 We ended our schedule with NANETTE LEPORE and MILLY. Fashion Week is crammed full of shows for contemporary labels like these, and we had mostly been ignoring them because seeing too many of them gets boring, to be perfectly honest. Having said that, we always admire Lepore for her commitment to preserving New York's garment district, and her show proved that you don't have to look overseas to manufacture well made, well priced clothing. Lepore's guests included faithful fan Patricia Clarkson and Arianna Huffington at the end of the runway who conspicuously couldn't tear herself away from her smartphone for the 15 minutes it took to calmly watch a fashion show. Even the typically super-feminine Lepore added biker and military looks to her line, which puts her right on trend -exactly where a contemporary label wants to be. Milly's Michelle Smith debuted a new logo and branding meant to update her line, and she went high tech with hologram metallics and lots of exits that made the '80s look fun again. Actually, the '80s were a lot of fun, it's just that most of Milly's customers wouldn't have remembered them, so it's all new to them. 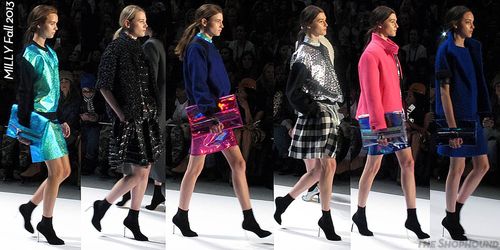