Marchesa Designer To Bring An Extravagant Touch to JCPenney 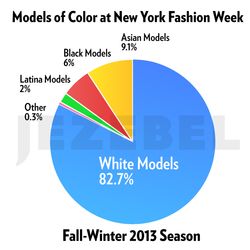 A few years ago, there was a great deal of concern over the lack of racial diversity on the Fashion Week runways of New York and the rest of the world, and The Shophound took it upon ourselves to tabulate how well the shows we saw represented models of color. In the ensuing seasons, the situation appeared to improve, and we stopped counting faces in part because we found ourselves paying more attention to the models than the clothes. The folks at Jezebel, however have been vigilantly tracing such data, and this week they reported that though things may have improved in the past, last week's shows showed something of a backslide in diversity with white models taking up a whopping 82.7% of the runway appearances in New York's fashion shows (see one of their many charts at left). Though some designers offered more diversity than others, most shows featured only a relative few appearances by models of color. In fact, there were 13 shows which featured no non-white models at all.

It should be noted that Jezebel compiled their data from the top 151 women's runway shows covered by Style.com, and did not include many other less prominent designers collections or men's shows like Nautica which, in particular, has always featured a diverse lineup. Another factor to consider is that many of the industry's top models have been skipping New York's show season altogether in recent years, including recognizable faces of color. Joan Smalls, on of the industry's biggest names skipped New York entirely, but made her way to Europe for Tom Ford, Gucci and Fendi, so far. Despite Jourdan Dunn's welcome return to New York's runways after several seasons, many popular models of recent years who added to diversity like Arlenis Sosa, Lakshmi Menon and Chanel Iman have made their presences scarce in New York. This may be partly a result of the widely held belief that fewer and fewer designers in New York are now paying their models in actual cash, offering clothes instead, or in some cases, just the valuable exposure of appearing on a prestigious runway. That is a subject for a different though not unrelated discussion, though it hardly makes it worthwhile for many of the top faces to even bother with New York Fashion Week at all.

As we wrote this post, we took a few minutes to watch Prada's fall collection livestreamed from Milan. Among a cast of recognizable veteran stars including Adriana Lima and Jessica Stam, who pick and choose their runway appearances, we saw no dark skinned faces at all*, which is, unfortunately, not unusual for the brand. We did see a few Asian models, however. According to Jezebel's data, designers are more likely to hire models of Asian ethnicity than darker skinned ones, and it's not to difficult connect the dots to the importance of the vast and fast growing Chinese market. It's too bad that a sophisticated and influential brand like Prada, and they are not alone in this apparent practice, appears to be using such a simpleminded approach to diversity in their casting —to the extent that they are using any approach at all.

Click over to Jezebel for their full report and meticulously calculated statistics. It is both illuminating and disappointing.

*After checking the runway looks we realized that Prada did cast Cora Emmanuel, a black model, whom we didn't immediately recognize in the live streamed show. So that's one out of 48.

Fashion Week’s Models Are Getting Whiter By Jenna Sauers (Jezebel)