Fashion's Night Out
Is Staying In This Fall

Not Getting Married Today Edition 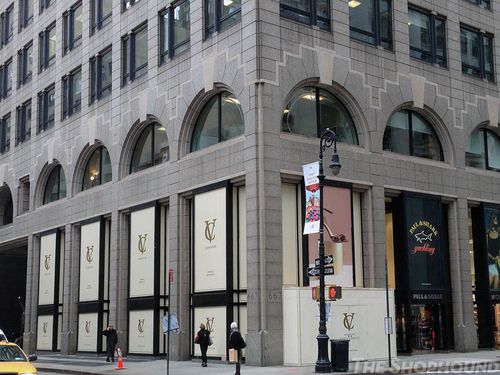 When we heard that the burgeoning footwear turned lifestyle brand Vince Camuto was taking over Cole Haan's store at Madison Avenue and 61st Street, we thought, "Sounds cheap," especially to open up right across the street from Barneys right in the middle of the most luxurious shopping district in Manhattan. If the signage that now covers the currently-under-renovation space is any indication, however, the location will be devoted to the VC Signature label, which offers more luxurious footwear in the $185 to $495 range. So, yeah, it's still a little on the low end for Madison Avenue for a corner just a few steps from Brian Atwood, Roger Vivier and Tods, not to mention Barneys' lavish shoe floor, but it's not quite the downgrade we and, presumably, the upcoming store's neighbors thought it would be. The Camuto brand has stores on 34th Street and in Grand Central Terminal with a flagship on Broadway in SoHo and a Flatiron district store on the way. This long and narrow 1,700 square foot store may be better suited to promote its higher end shoe and handbag line, possibly along with the about to be launched men's collection, and downplay the lower end products. When will it open? We don't know just yet, but we are guessing it will take until late Spring or early Summer to remove the Cole-Haan-nes and install a new look.