With A New A|X Job And A Big Kickstarter Project, Patrick Robinson Is America's Most Resilient Designer

CAN'T PASS IT UP: 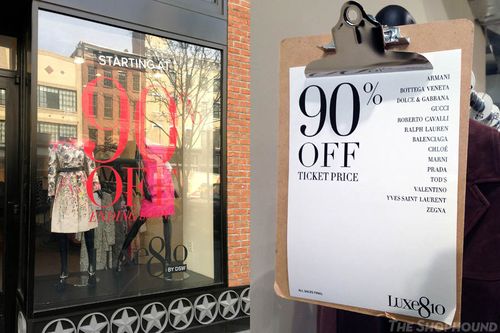 It's getting closer to the end of March, and that means that DSW's deeply discounted designer apparel pop-up shop, Luxe810 will be closing soon. As any good sample sale shopper knows, the prices get better at the end, and Luxe810's started out pretty good. Yesterday, The Shophound strolled by and noticed that the discount had been raised from 80% to 90% off.
That's 90% off, folks.
It doesn't get better than that, and it makes for easy math. Just move the decimal point on the price tag. The merchandise is not quite as abundant as it was when we discovered the shop, but there's still plenty of stuff left from the designers listed in the image above including Bottega Veneta, Roberto Cavalli and Gucci to name a few. Imagine a Ralph Lauren suit for under $150. How about a special Valentino dress for $300 or so? We aren't sure what the exact closing date of the shop is, but at these prices we don't expect it to last too much longer.