More Renovations In Store For
Lord & Taylor On Fifth Avenue 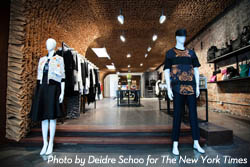 Today's Thursday Styles finds Critical Shopper Jon Caramanica in the unusual position of reviewing a store that is geared more toward women than men. At Owen in the Meatpacking District, he calls in three female 'superfriends' to help him navigate the boutique that "merges Lower East Side sensibilities with Upper East Side prices." Unfortunately, this does not mean, as we had immediately thought, that he recruited Wonder Woman, Black Canary and Hawkgirl to help him with his column —because that would have been awesome!

Instead, he recruited three ladyfriends whose collective tastes cover pretty much all the bases, so somebody would have had to like something in the place, and essentially that's what happened. Our shopper doesn't pawn the effort off entirely, finding a few things for himself in the mix, although we can't really figure out what is the root of his personal style? Is he the neo-classicist heritage hipster, or the sort of person who would get excited over loud floral jeans as he does this week?