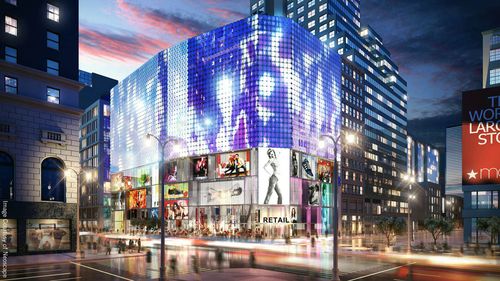 More information has been revealed about the dramatic makeover in store for the currently forbidding Herald Center mall at 34th Street and Sixth Avenue. The Observer has released a rendering of the building's new look from architectural firm Moed de Armas & Shannon, who have been responsible for 120 West 42nd Street and the retail expansion at the General Motors Building. As expected, the janky dark glass covering the building will be entirely removed. Sadly, nothing remains of the original, ornate façade that existed when the building was a somewhat humbler, pre-Fifth Avenue Saks (until the early 1960s, there were both a Saks Fifth Avenue and a Saks Herald Square operating in Manhattan). The building's new configuration will include brighter, clear glass covering on the three bottom stories designed to attract more upscale retailers. The upper façade will apparently be a more opaque mosaic patten, and brightly lit electronic signs also appear to be part of the scheme, although, outside of Times Square, the extent of such animated signage has a lot to do with zoning rules. While almost nothing ever winds up looking as pristine and sparkling as the renderings that precede them, if the final result looks even half as good as the picture it will be a vast improvement for the Herald Square neighborhood. It looks like current owner JEMB Realty's goal of getting Topshop or a similar type retailer as a tenant is not so farfetched after all.