Looking Ahead To Fall '13 With Levi's

More Renovations In Store For
Lord & Taylor On Fifth Avenue 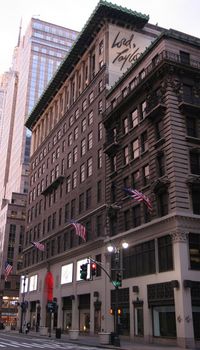 The news keeps coming in about Lord & Taylor's efforts to renew its Fifth Avenue flagship, which, apparently have been successful in bringing more customers through it doors. Last week, we heard about the planned re-emphasis on designer women's apparel there, but it turns out that there is much more coming up this year for the historic store. WWD tells us that as part of Canadian parent Hudson's Bay Co. $180 million annual capital expenditures over the next five years, the landmark location will get a newly renovated men's department expanded to 100,000 square feet on both the 9th and 10th floors by this September. This will be a major part of the two-year $40 million renovation that will also touch other floors in the store that weren't significantly redone in the recent $25 million renovation that dramatically refreshed the store's main floor. And to think, just a few years ago, retail pundits were speculating that the building might be sold or that the store it contains would be substantially downsized.

We weren't wrong in speculating that Hudson's Bay's spending was in response to Nordstrom's expansion. The Seattle chain will be opening locations in Canada even before it's much anticipated New York City store appears in 2018. By Fall of 2014, the chain will be crossing the Northern border with both full line and Rack stores, and The Bay is investing in upgrading many of its own Canadian locations to meet the challenge. Part of the program includes opening a Bridal Salon in the Bay's immense Toronto Flagship run by New York's legendary wedding gown specialists Kleinfeld's.

But back in the U.S., Lord & Taylor will also begin to reverse a severe downsizing of the chain under previous management from 10 years ago that limited it to its strongest market in the Northeast. This fall, it will open an 80,000 square foot store in Boca Raton, Florida, so call Grandma and tell her to get ready.

A few years ago, when Lord & Taylor's longtime corporate parent May Co. merged with Macy's Inc., it looked like Lord & Taylor's future would be in question, especially since Macy's had few compunctions about absorbing popular regional nameplates it had acquired, like Marshall Field's for example, into its own vast fleet of stores. Its new owner, however, turns out to be willing to invest far more into the chain than May ever did to keep it vital and appealing —a relief to customer who crave even a little bit of choice and competition in the market.