TIPS FROM THE PROS:

So, Is SoHo's Saint Laurent Boutique Ever Opening Or What? 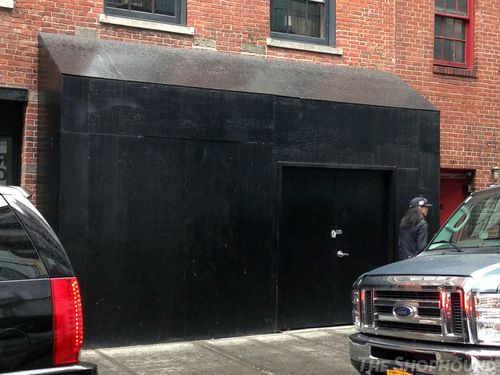 This week marked Saint Laurent creative director Hedi Slimane's second women's runway show for the label (also known as his second women's runway show for anything, ever) and, as if by magic, managed to monopolize the press with a debates on the merits or lack thereof of his strangely grunge-inspired display. The reception was not warm. Though he had a few supporters, most critics were dismayed that he would go down such a well-worn road while retailers were wondering exactly they could edit from the collection to keep their stores from looking like an overpriced corner of Urban Outfitters. He'll probably be banning a lot more critics than just The Times' Cathy Horyn next season, but all the fuss made us wonder what the hell is going on with the supposedly upcoming Saint Laurent boutique on Mercer Street in SoHo (pictured above) that has been in the works for around two years by now?

Originally, it was slated to open last Spring, but that was when Stefano Pilati was running things at YSL. Then Slimane replaced him as creative director and was reported to be tasked with revamping nearly every aspect of the brand including store design, so it seemed logical that the shop would be pushed back until a new Slimane-approved concept could be developed. We guessed that would have coincided with the launch of the designer's new collections this season. By July, the store's plywood was quietly repainted to reveal the label's redesigned logo to much debate and hand-wringing. By September, a new retail concept was unveiled at a Saint Laurent boutique opening in Shanghai, and we assumed it would next be rolled out to the SoHo store. In fact, we thought the shop was perfectly poised to make its debut with the new collections a month ago during New York Fashion Week, but no such event happened, We passed by the store's site yesterday, and though we couldn't tell if there had been progress on the store's interior, the black painted plywood was now clear of any logos at all. In the meantime, that particular block of Mercer street has only gotten more more exclusive with a new Versace boutique opening last Fall, and an upcoming Balenciaga flagship on the way.

Is this Saint Laurent store ever going to open?

Like many observers, The Shophound has been intrigued but underwhelmed by many of Slimane's creative choices (really? Grunge? In 2013?), but we know that he always has a pervasive, soup-to-nuts vision for his brands. We have been looking forward to seeing what his new store concept looks like in person, especially since when the designer first attracted notice for his work at what was then called the Rive Gauche men's collection, it was shown off in a SoHo YSL boutique not far from where the new one is expected to be unveiled. Perhaps they are having construction issues, or maybe the increasingly persnickety designer doesn't want to open a shop in a space that he did not personally choose? At any rate, we may not have to wait until the SoHo Saint Laurent opens to get a taste of the new store concept. A couple of weeks ago we visited Bergdorf Goodman's recently renovated men's Designer Floor, and noticed that the Saint Laurent space, which had just been unveiled barely six months ago, was under wraps again, presumably to bring the shop-in-shop up to speed with the revamped collection's new sensibility. The Saint Laurent flagship on 57th Street has yet to be fully renovated beyond a new sign, and still reflects the Pilati/Tom Ford era aesthetic, so it may be at Bergdorf's that New York gets its first glimpse of Saint Laurent's latest retail environment.