SoHo's Saint Laurent To Open In May? 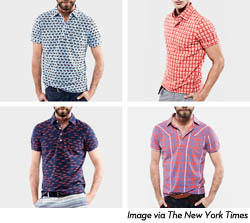 It has been a while since Uniqlo has tapped American designers for its many collaboration lines. The most recent we can recall was a team-up with Costello-Tagliapietra for a series of well-received dress collections a couple of years ago, and we would have to go back even longer to remember Designer Invitation collections from American menswear brands like Loden Dager, Tim Hamilton and Gilded Age. Lately the chain has been focusing on Japanese women's sportswear designers, but that will change next week when the store launches a plethora of new polo shirts designed by Michael Bastian (who is having a busy week of publicity right now). There's no shortage of polos on Uniqlo's shelves right at this moment, but Bastian's will add the designer's special signatures including bold, unexpected prints, and a devotion to perfect proportions that trims down the silhouette and creates an arm enhancing sleeve. “It should fit right above the biceps to give the illusion that you are just about to bust out of it,” he tells the New York Times, so you may want to either buy a size up or just put down that bagel.
Forever.
The best part is that they will retail for a mere $19.90 which less than a fifth of what a similar shirt might cost even from the designer's less expensive collection for Gant.

Bastian isn't the only American designer to check into Uniqlo's studios this season. Erin Beatty and Max Osterweis of the women's label Suno will have a collection of cotton dresses hitting the chain's store's next month, just in time for Summer wardrobe shopping.

You can plan to wear your new clothes on a Friday night to the Museum of Modern Art, where Uniqlo will become the exclusive sponsor of its Friday night free admission program which waives entry fees on that day from 4:00 to 8:00 PM. The chain will take over the sponsorship from Target on May 3, and the first 1000 visitors on that night will receive special Uniqlo tote bags, so mark your calendars

UPDATE:
It turns out that those Michael Bastian polo shirts won't be hitting Uniqlo stores until May 20th, so save the date. GQ.com has 23 images of them HERE and HERE. It can't hurt to make your choices early.

The $20 Dollar Polo That Looks Like It Costs $200  &  See More from the Uniqlo x Michael Bastian Polo Collection (GQ.com)