Keep An Eye Out For Uniqlo's UT Truck 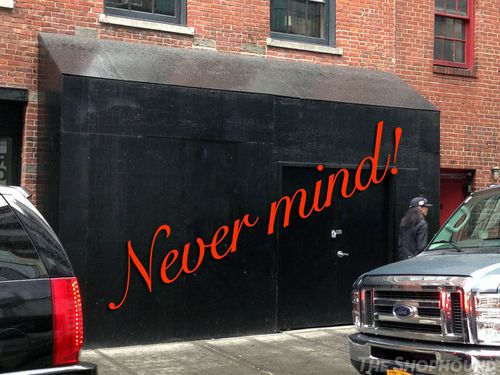 Few upcoming boutiques have perplexed us as much as the upcoming Saint Laurent store on Mercer Street in SoHo.
Originally planned a couple of years ago, it was reasonably postponed when Hedi Slimane was appointed as Creative Director for the brand last year —most likely so the detail oriented designer could create his own, new interior concept for the brand. Later in the summer, the plywood covering on the construction site was used to subtly introduce Slimane's somewhat controversial new logo for the Prêt-à-Porter lines, and then, recently, we realized that all identifying logos had been removed from the space completely. What was happening with this place?

Today, our friends at Racked have discovered through some clever sleuthing that Saint Laurent has inded abandoned the Mercer Street site which would have been a stone's throw from Marc Jacobs, Vera Wang, Marni, Versace, Prada and Balenciaga for a different location at 80 Greene Street just below Spring Street and across the road from racy, luxury lingerie shop Kiki de Montparnasse. Why the move from a perfectly nice space that the company had been on control of (and presumably paying rent on) for about two years? Who knows? Slimane is known to be exceptionally persnickety even for a fashion designer, so perhaps he just didn't want to put a high profile shop in a location that he hadn't chosen himself, or maybe there were other, totally unrelated problems. Maybe it was clustered too close to other luxury designer shops. Possibly parent company PPR Kering has some other plans for the Mercer Street location. We have seen stores take more convoluted routes to finally opening... but not many. We'll be on the lookout for confirming signage.

Breaking: Saint Laurent Is Opening on Greene Street (Racked)
Previously:
So, Is SoHo's Saint Laurent Boutique Ever Opening Or What?