Cartier Slated To
Camp Out At The GM Building 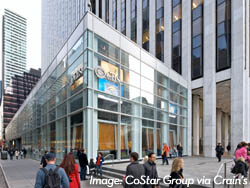 It's always a challenge for an iconic store to give up a signature location —even if it's temporary— but Cartier is about to trade it's longtime Fifth Avenue home for an even higher profile spot while the landmark mansion undergoes extensive renovation. The legendary jeweler will take over 6,000 square feet of space most recently used as a studio for the CBS Morning Show on the northwest corner of the GM Building, facing Fifth Avenue and overlooking the plaza that includes the Apple Store's signature glass box. The time frame for all this transition is still a bit murky as the space will need some renovation of its own to make it suitable for housing a luxury jeweler like Cartier, but you can probably expect the store to make the move sometime this year before renovations begin on the flagship at 52nd Street and Fifth Avenue. Even with immediate neighbors like The Plaza Hotel, both Bergdorf Goodman stores and, of course, housemates F.A.O. Schwarz & Apple, it's hard to say that the GM Building is a better location than Cartier's home since 1917. It doesn't come with the famous story that it was bought from its previous occupants for $100 and a particularly spectacular double strand of pearls worth $1 million, and, obviously, the jeweler will be renting not owning, but you have to admit that it is one of the best retail locations in the city that has not yet held an actual store. Before the extensive remodel that changed the base of the building and made it suitable for CBS, GM always used the space as a showroom for its latest auto models. While Cartier may be tempted to hang on to such a great location even after its renovations are finished, it's unlikely that it will need that much pricey space on Fifth Avenue. The interesting question is who will have the resources and status to take over the spot as a permanent home? Let the speculation begin.