GET SOME CASH FOR YOUR TRASH: 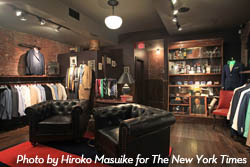 This week's Critical Shopper column sends Jon Caramanica down to Bleecker Street for his response to the new J.Press York Street boutique where he is essentially underwhelmed. His main concern is that the venerable retailer's new, younger line, should —according to our shopper— emphasize and amplify the most eccentric and daring aspects of the Preppy style it has represented for decades, but it doesn't exactly.

...none of the vibrant, lightning-bright color choices; none of the eyebrow-raising patterns; none of the insouciance of a wearer who directly correlates income level with risk-taking. Prep never apologized. Just ask all the less-privileged people underfoot.

Of course, whether or not the line's creative directors, Shimon and Ariel Ovadia, of the up and coming label Ovadia & Sons, share that point of view remains in question. They seem more concerned with remaking the classic J.Press look in trimmer cuts and more casual fabrics to maximize its commercial appeal to a younger, hipper customer, and to stores like Bloomingdale's which is also selling the line. It's not like there aren't enough designers already deconstructing the prepster. After all, the Gant Rugger shop is only a block or two up the street from J. Press York Street, along with Brooks Brothers' Black Fleece boutique. Still, our shopper does not leave the store empty handed. A blazing red barracuda jacket has caught his eye, amongst the copious Yale memorabilia, but that's really more of a James Dean look —not to be confused with preppy at all.