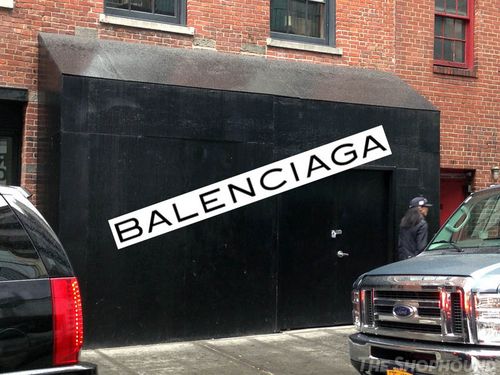 Now we have the final piece of the puzzling story of the shop that was to be a Saint Laurent boutique at 149 Mercer Street. The space, which before it was banished behind misleadingly labeled plywood has held John Varvatos and Napapijri boutiques, will become a Balenciaga men's boutique to complement the flagship store for the label that is under construction across the street at number 148. This will be the brand's first freestanding men's store in the U.S., and, as far as we can tell, possibly in the world. Of course, this makes perfect sense, since Balenciaga, like Yves Saint Laurent, is owned by Kering (formerly known as PPR) which would simplify any lease transfer issues.

Originally set to be opened before Yves Saint Laurent underwent a revamp by new creative director Hedi Slimane, the store was delayed, and delayed, and then ultimately moved to an entirely different space on Greene Street, leaving the fate of the apparently unloved Mercer Street location in question. WWD answered that question for us by casually dropping the bit of information while reporting on the label's Fall advertising campaign. Interestingly, it will also be one of the first new stores from Balenciaga's own closely watched creative revamp under designer Alexander Wang. Hopefully, the store will open concurrently with it's counterpart this Fall.