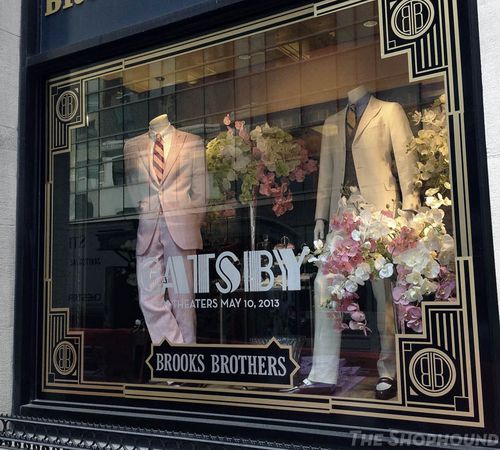 As we have mentioned, Baz Luhrmann's 3-D extravaganza adaptation of The Great Gatsby which opens a week from today, is being marketed as aggressively as a superhero franchise, if not more so. How successful the director and Warner Brothers will be at making a Summer movie tentpole out of an F. Scott Fitzgerald classic with no possibility of a sequel —one that has already been filmed at least four times before— remains to be seen, but they seem to be pulling out all the stops to reach a fashion-minded audience. In fact, here in New York, it almost feels like anyone with functioning senses is being clobbered with a barrage of Gatsby promotion and related merchandise as if it will irresistibly compel them to buy a ticket next weekend to the movie. If you have been hooked, here are all the stores to visit that participating in Gatsby promotion, or if you are already sick to death of hearing about it, think of them as stores to avoid for the next month.

BROOKS BROTHERS: We mentioned this a couple of weeks ago. Brooks Brothers worked with Gatsby's costume designer Catherine Martin to produce hundreds of costumes for the film's male characters from leads to background actors. The store's Madison Avenue flagship has been completely Gatsby-ized along with nearly all the windows (pictured above) featuring displays of costumes from the film and promotional placards placed throughout the store. A special Gatsby-inspired capsule menswear collection featuring pastel linen suits and vintage-style formalwear has reportedly been selling well.

TIFFANY & CO.: Tiffany also assisted in costuming Gatsby. Perhaps you noticed the humongous blue Tiffany gift box constructed over Rockeffeller Plaza's ice rink last month for the store's lavish "Blue Book Ball" gala ostensibly celebrating its catalog and  launching its "Jazz Age Glamour" diamond, platinum and pearl jewelry collection tied to the film. We haven't seen Tiffany launch a product line with that kind of fanfare since, well, ever, so it's safe to assume that Warner Bros. footed the bill for that one to promote Gatsby. The collection is being displayed in Tiffany's windows, and, in what seems like another first, the store's iconic 1940 facade has been festooned in Art-Deco scroll pattened decals in an attempt to retro-ize it a few decades.

PRADA: Designer Miuccia Prada also contributed costumes for the movie, several of which are currently being displayed in the luxury brand's SoHo Epicenter Plagship, the site of yet another recent gala party promoting the movie. What's on the Prada homepage right now? A film still of Gatsby stars Carey Mulligan and Leonardo di Caprio.

FOGAL: You'll see Gatsby in the windows at Fogal's stores and since it also provided hosiery for the film, it gets the rights to produce, you guessed it, a special collection of 20s-style hosiery featuring seams and deco-patterns.

THE PLAZA HOTEL: The hotel figures in the movie and hosted yet another recent party for the movie, its New York premiere. The hotel's website has been taken over by the movie, and features an "F. Scott Fitzgerald" Suite for anyone who wants a total immersion experience. In addition, there are Gatsby themed dishes created for the Plaza's restaurants and Food Halls

MOET & CHANDON: You will see the champagne's product placement in the film as well as amongst the other retail tie-in display for even more cross-cross-promotion. For example, Brooks Brothers' Gatsby mannequins are posed next to pyramids of the brand's bottles.

MAC: Among the quieter of the movie's promotional partners, we haven't seen as much in-store promotion from MAC, but it provided makeup support for the film and has been promoting Gatsby makeovers in the press over the past weeks

So there you have it all. Just try and avoid this movie while you are shopping this week, and we aren't even counting the relentless marketing of the movie's totally period inappropriate soundtrack album. Don't worry. It'll be over in a few weeks, so you can be ready for the marketing onslaughts from The Wolverine and Man of Steel.