Saint Laurent SoHo Getting Ready
To Open Any Day Now 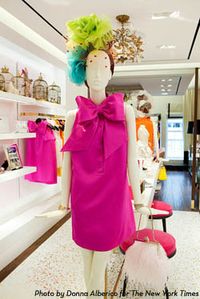 By the end of her Critical Shopper column in today's Thursday Styles, Alexandra Jacobs seems positively offended by the new Kate Spade flagship on Madison Avenue. Maybe we should blame Mad Men, but, apparently, designers can no longer reference the styles of the late 1950s and early 1960s without somehow being believed to endorse the restrictive social mores of the moments just before modern feminism emerged.
Or mabe she just hates gingham.

Jewel tones, bad puns and smatterings of adornment on basic sportswear (contrary to the label’s origins, Ms. Lloyd finds minimalism “a bore”) — it was all a little J. Crew, but slightly askew.

That's creative director Deborah Lloyd she's referring to above, who is primarily responsible for the air of forced insouciance that has reportedly enveloped the new store. If you have a lingering obsession with Charlotte from Sex And The City or perhaps an attachment to Holly Golightly, then perhaps Kate Spade is for you, but it seems that Ms. Jacobs has already evolved beyond it all. Can't say we blame her.