The Comme des Garçons Archive Sale To Return Next Friday

Bonobos Takes It to The Street In SoHo 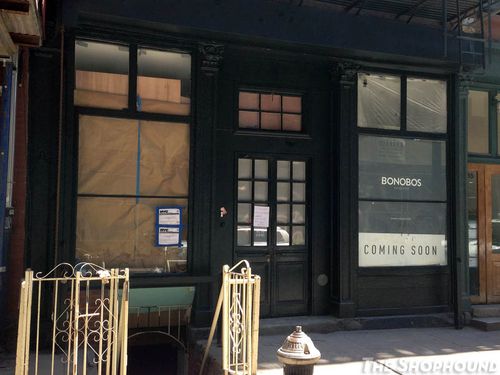 Men in need of pants will soon be getting a big break in SoHo when Bonobos, the 6-year old men's sportswear company opens its first street level shop at 25 Crosby Street. Of course, there is no shortage of available pants, but Bonobos has swiftly built a strong internet business based on expertly cut trousers for gentlemen without ever opening an actual store. They are one of the big e-commerce success stories of recent years, not unlike eyewear brand Warby Parker which also just opened its first public store a few blocks away. This will not actually be Bonobos' first boutique, exactly, since it won't be a traditional store with any merchandise at all —yet. Called a "guide shop" the space will provide try-on samples of the brand's collection which customers will be able to order and have sent to their homes, much like a similar, appointment-only service currently available in the company's Chelsea showroom. Another Guide Shop is set to open in Bethesda MD later this year, with more likely to follow. How long the company will be able to go without opening a full service retail store remains a question given its fast growth. It has gotten big enough to hire up-and-coming menswear designer Ian Velardi as creative director, so you can expect a more refined fashion edge in the offerings which have grown to include sportswear, tailored suits and accessories. For now, appointments are recommended when the Guide Shop opens later this month, joining other menswear shops like Saturday's Surf and Carson Street Clothiers on what is becoming a much busier strip of Crosby Street.