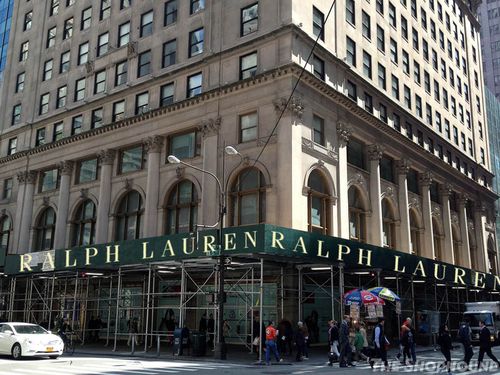 An interesting twist in the Ralph Lauren Fifth Avenue flagship story has been uncovered by our friends at Racked. The 35,000 square foot store will focus exclusively on the designer's original Polo label and will include a restaurant. The information was revealed in a transcript of last week's management call:

We've... committed to open a 35,000-square foot flagship store on Fifth Avenue in New York City that will be a major brand statement, featuring a full assortment of Polo men's, women's and children's merchandise, as well as a restaurant. Scheduled to open in the fall of next year, we believe the flagship store will really set the stage for the broader global strategy, especially since it is located in one of the world's most popular tourist destinations.

The Polo Store concept is a relatively recent addition to Lauren's extensive and growing retail network, but one that has been identified as a potentially strong vehicle for further growth. The first one was just opened in East Hampton, NY, and another is expected to bow in September at The Mall at Short Hills in New Jersey. Restaurants have also been included in Lauren Flagships in Chicago and Paris, but both concepts will be appearing for the first time in New York City at the Fifth Avenue store. Of course, Ralph Lauren's original retail stores also carried awnings that read "The Polo Shop", but that was years ago, when he only made one women's label, and the Polo brand, which he started his company with in 1967 encompassed all of his product offerings for men (The Ralph Lauren women's label and the pony insignia were introduced in 1970). Now, a profusion of brands has made the designer's original label the most affordable one that he carries in his own stores (The more moderately priced Lauren and Chaps brands were developed for department store distribution and are not sold in the designer's boutiques —yet). It makes sense to highlight it in his most tourist friendly store, while keeping the more luxurious Collection, Purple Label and Black Label lines in more rarefied locations like the twin mansions on Madison Avenue at 72nd Street. Of course, the Polo label is currently used only for Men's and Boys' products. Presumably, the new Polo Store concept will include the women's Blue Label collection which was created as a counterpart to the Polo label, although Ralph Lauren's president and COO Roger Farah intimated in a recent WWD article that the company was considering expanding the Polo brand to include women as well. As for the proposed restaurant, we don't yet know if it will be another version of the rather formal RL Restaurant found in other Ralph Lauren flagships (see menu HERE), or a new, more casual concept in keeping with the store's products (probably a lot of polo shirts and khakis) and clientele. Lauren and his team have plenty of time to decide. we will all see how it shakes out in Fall 2014 when the new store is set to open.