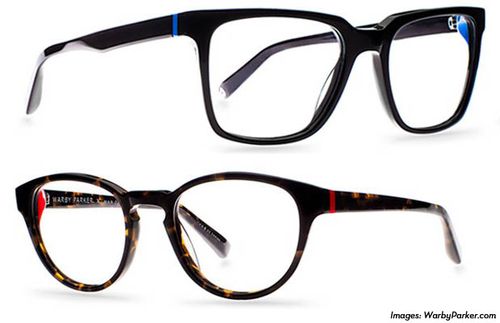 Now that we are pretty much finished with the epic "Gatsby" hype, it's on to the next summer blockbuster. Warner Bros.' Superman reboot "Man of Steel" opens in a couple of weeks or so, and we can all expect the promotional frenzy to start ramping up right about now. While most of the films marketing is aimed at traditional superhero-themed product like action figures, t-shirts and the like, the film has looked beyond the Comic-Con crowd by teaming up with burgeoning eyewear brand Warby Parker to offer two styles of eyeglass frames for men and women inspired not so much by Superman, but by his mild mannered alter ego, Clark Kent. The squared-off Chamberlain and more rounded Percey models are suitably classic (though interestingly not made of steel at all) and feature discreet slices of color at the temples that reference the colors of Superman's classic costume (both pictured above). Like most of the brand's other frames they are available through the brand's website as well as, presumably, at its new SoHo flagship for $95 each including prescription lenses. As per company policy, Warby Parker continues to donate a pair of glasses to someone in need for each frame of any kind it sells, but for these two limited edition styles, the company will also add to that an additional $15 donation to 826NCY, a not-for-profit organization that helps students from age 6 to age 18 to develop their writing skills —so perhaps they too can one day write for the Daily Planet even if they don't happen to have a secret, superpowered sideline in heroics.