About The Metropolitan Museum's Other Fashion Exhibition 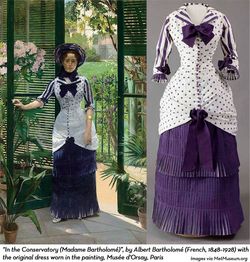 Would you have considered The New York Times' street style photographer Bill Cunningham to be an Impressionist? How about bloggers like Tommy Ton or The Sartorialist? You might see it differently after a tour through Impressionism, Fashion, and Modernity, the other fashion exhibition at the Metropolitan Museum.

Yes, Punk: Chaos to Couture, the Costume Institute show that opened last week to it's usual excess of Party-of-the-Year fanfare is getting the lion's share of attention, but it looks like the Paintings Department has pulled off a more relevant show about fashion without the video screens, fancy mannequin wigs and hyper styled exhibition design.

If you remember your Art History class, you'll know that one of the things that set the French Impressionist painters apart form their stuffy academic predecessors, was a strong interest in accurately representing daily life which included, not at all incidentally, accurate representations of the fashions of the day. In fact, the show makes the argument that many revered paintings by Edouard Manet, Claude Monet, Gustave Caillebotte and James Tissot (who bridges both camps) were purposely little more than glorious fashion illustrations. New technologies and the advent of department stores and boutiques made high style ever more accessible to more Parisians, and showing it off became a pastime of sorts not just for the wealthy, but also for the burgeoning bourgeoisie. In many ways, you can see the roots of how fashion has embedded itself into our modern culture. To enhance the remarkable collection of paintings assembled for the show (and really, looking at a bunch of any wonderful impressionist paintings is hardly a chore) The Met has collected rare examples of 19th Century apparel from its own collections and from other museums that come incredibly close to replicating the styles represented in the various paintings, with one single dress (pictured above) being the exact same garment worn by painter Albert Bartholomé's wife in his 1881 portrait of her.

Sadly, Impressionism, Fashion, and Modernity closes on May 27th, so you only have a couple more weekends to catch it, but it's worth hurrying to see before it's gone. You can catch the Punk show down the hall while you are there, —and it's certainly entertaining— but you might be surprised to discover which show is really the most relevant.

Impressionism, Fashion, and Modernity At the Metropolitan Museum of Art through May 27th, 1000 Fifth Avenue between 80th & 84th Streets, Upper East Side