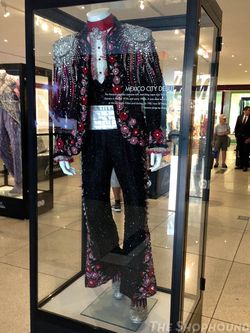 If you subscribe to HBO, you couldn't possibly be unaware that the channel is finally debuting the Liberace biopic "Behind The Candelabra" this weekend, but you might have missed the notice that a small but very, very sparkly exhibition of the flamboyant pianist's actual costumes and other effects are on display this week on the second floor of The Shops at Columbus Circle. Six full costumes (including crystal encrusted footwear) loaned by the Liberace estate are on view as well as other selected memorabilia to promote the film, and they are worth seeing if only for their sheer bats#!t craziness. They are so elaborate and intricately constructed that they were actually too heavy and expensive to replicate exactly for Steven Soderbergh's film. Though the appeal of Liberace as a personality and performer defies contemporary showbiz logic, he certainly was beloved enough in his day to go as far over the top as he wanted —and his costume designers were able to take him, leaving an incredible collection of things that are peculiar to his own, unique aesthetic and worth seeing just for spectacle's sake, or maybe just a good laugh. Look at it this way: When are you ever going to get another chance to see an automobile entirely covered in Swarovski crystals?

The Behind The Candelabra Exhibition through May 27th at The Shops at Columbus Circle, Second floor

Posted at 12:17 AM in Special Events, Television, Upper West Side | Permalink | Comments (0)