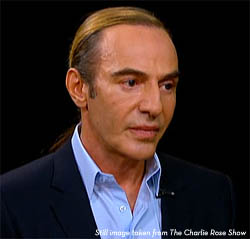 You may have already read the big Vanity Fair interview, but now disgraced couturier John Galliano has done his big TV interview about the highly public breakdown that got him booted from his job as creative director at both Christian Dior and the label that bears his own name. In the absence of Oprah's vast platform, Galliano taped an interview with Charlie Rose which aired last night on PBS stations. You could be forgiven for missing it, as the entire taping and airing happened within a couple of days, but along with clips on YouTube, the entire show is steaming on Rose's website HERE.

Galliano rehashes much of what he went over with Ingrid Sischy in Vanity Fair, but the most striking aspect may be that, for the first time in the decades since he has become a well-known designer, he made a public appearance unencumbered by the flamboyant personal style that helped to make him an unmistakable figure in the fashion world. He was sober, not only physically, but sartorially as well. Gone were the hair extensions, the sculpted facial hair and elaborately embellished garments he is known for wearing. Galliano sat clean shaved, with his hair tidily pulled back in a low ponytail and wearing the most mundane navy blue jacket and simple light blue dress shirt without so much as a pocket square to recall his usual flair. If you ever wondered what this guy really looked like under all that costume, then here you are.  Is this the debut of a new, stripped down Galliano style? Maybe, but it is more likely that he is trying to make as favorable an impression as possible on the public at large not only in America, but worldwide, where this interview will inevitably be seen in one format or another. It's hard to imagine that he would give up his dramatic personal style permanently, but you can't blame him for wanting people to see him as a normal human being instead of the scarf-swathed weirdo who spewed drunken, hateful statements in the much circulated videos that led to his downfall —an excerpt of which Rose showed just in case anyone had missed them the first time around.

Will it all work? In transforming his appearance, Galliano seems to be signalling that he will go well out of his way to show that he is not some fashion feak, but a real person who is capable of personal growth. While many Jewish leaders have emphasized an obligation to accept sincere apologies and efforts to improve oneself, others have been less forgiving, and students at Parsons School of Design recently made it clear that he was not welcome there to teach a master class similar to one that had been well received at Central St. Martins College of Art & design in London. The designer seems ready to get back to work, but ultimately it will be up to the retailers who will carry the products he will eventually offer and their customers to decide if they are ready to have him back.