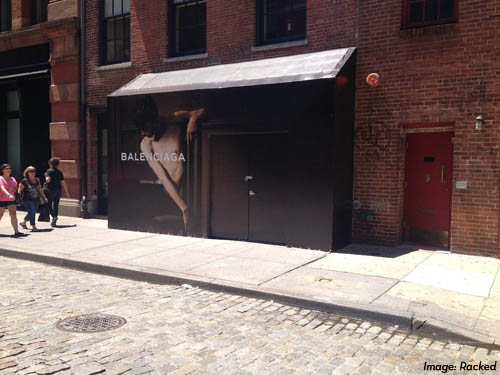 Designer boutiques may be taking over SoHo, but they sure are taking their sweet time once they find their spots. Our friends at RACKED have discovered that the Balenciaga Women's & Men's boutiques set to open this Summer on Mercer Street have been pushed back to November, meaning that they will not be open to launch new creative director Alexander Wang's debut collections, which should be appearing in stores around August. That will be more than two years after the brand claimed its initial site. Racked even got a peek inside which showed an interior under construction nowhere close to being ready to open before Fall. What is causing the delay in completion may be the switch in designers. The women's boutique was originally planned by previous creative director Nicolas Ghesquiere and presumably would have featured the brand's then, fairly elaborate interior decor which typically included colorful, intricate, geometrically patterned details. As in the case of Saint Laurent, a new creative director brings a new vision for the retail concept, especially for a corporately owned luxury brand like Balenciaga. Perhaps delay is meant to give everyone time to figure out exactly what the store is going to look like.

In other developments, the store's exterior covering images featuring the Spring collection have been replaced with new campaign pictures from Wang's debut collection for the label including a new, slightly bolder logo. The newly added men's store (pictured above), until recently the intended site for corporate sibling Saint Laurent's boutique, has also finally publicly identified itself with imagery.