Are Dolce & Gabbana Going To Prison? 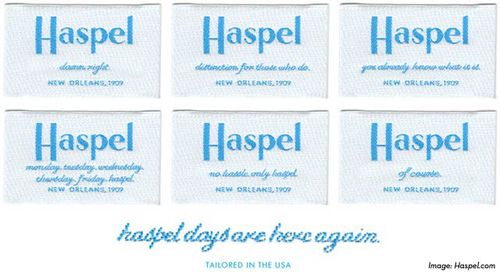 There was a time when every businessman in America had a cotton poplin or seersucker suit for sweltering summer days when no other attire would do. You could wash it and travel with it, and in all likelihood it had a Haspel label in it. In recent decades, the suit business has gone up and down, and stewardship of the Haspel brand had fallen to a string of licensees, often with dodgy and, usually stodgy distribution, but next Spring, after having been out of the market for a few seasons, we can look forward to the return of an updated, fully revived Haspel brand. It will be produced once again in-house by members of the original family that started the company and designed by Jeff Halmos and Sam Shipley of Shipley & Halmos.

As one of the few menswear "heritage" labels not yet mined by style-conscious revivalists, it was only a matter of time before it's re-invention would be at hand, and it turns out that the catalyst was the final expiration of the label's licenses, returning full control to its owners. Who knew that after 104 years, it was still owned by the original family? With Shipley & Halmos at the design helm, the new Haspel will include more than just wash & wear seersucker suits, but also a full collection of sportswear and tailored clothing most of which will be produced in domestic factories located in New England. Look for prices to fall just under the traditional designer level with suits retailing in the $795 to $1,200 —about twice what they cost under its most recent licensee, but somewhat less than Shipley & Halmos' signature collection. The designers tell WWD, "We look at it as an opportunity to take something that was once an important American brand and give it some much-needed love." So far, no images of the collection have been released beyond the re-designed label (pictured above), but hopefully we will get a chance to see the new, modernized Haspel collection sometime next month when New York's menswear market begins.

Haspel to Relaunch for Spring (WWD)