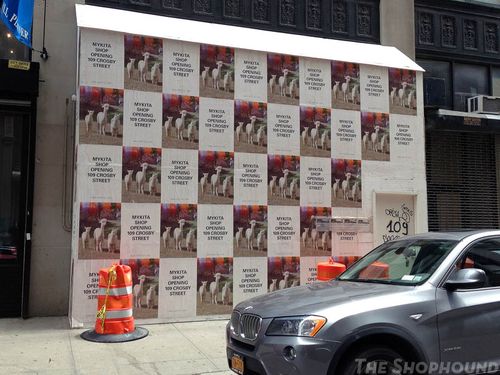 Crosby Street used to be the perfect location for a store that wanted to be in SoHo, but still slightly under the radar, but not for long. Every now and then, a previously ignored street gets some extra attention that increases its appeal as a destination in and of itself. A few years ago, a rush of new stores put the previously sleepy Grand Street in the spotlight —a process completed when Alexander Wang took over Yohji Yamamoto's flagship. After flirtations with Howard Street, staked out by Opening Ceremony and ratified by Jil Sander and Agnès B, it looks like Crosby will be the next SoHo street to get the spotlight with three new stores coming that are sure to raise its profile.

This year has already seen the arrival of a Bonobos Guide Shop and Crosby Street Clothiers, a new men's boutique that has garnered raves from the #menswear crowd and their admirers. Now, affirming SoHo as the premier destination for new Eyewear designer boutiques, the German optical brand Mykita is busy getting ready to open its first U.S. boutique at 109 Crosby. Barely a decade old, the exclusive label is best known for its signature architectural metal frames, but in recent years has added collaborations with designers like Alexandre Herchcovitch, Bernhard Wilhelm and Damir Doma. Mykita will join new recent additions Warby Parker and Cutler And Gross with more to come, as it's probably only a matter of months before up and comer Garrett Leight joins his dad's company Oliver Peoples somewhere south of Houston.

The next pair of additions comes from our friends at RACKED who  tell us that F.S.C. Barber will be moving from the Lower East Side to 33 Crosby making a hip little cluster with Bonobos and Saturday's Surf. A bit further south of Grand Street, Maiyet, the two-year old luxury label with a social conscience will be opening what, as far as we can tell, will be its first freestanding store. Based in New York and staging runway shows in Paris, the label can be found at a small but prestigious list of stores including Barneys here in New York, Selfridges and Liberty in London, Galeries Lafayette in Paris and through Net-à-Porter. The store is expected to open sometime this month. expect to hear a lot more about it very soon.