What Happened To Levi's On Lex?
+
Krizia Moves On 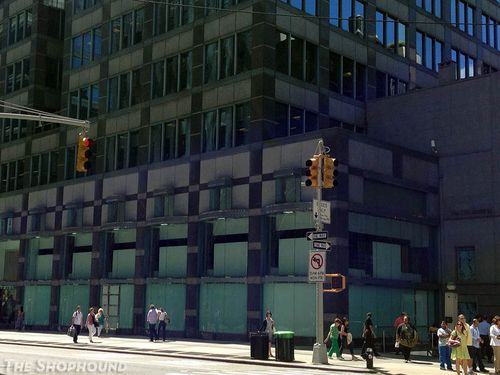 Every now and then a faithful reader poses an inquiry for The Shophound to follow up on. A few days ago, Al emailed us to ask:

"Any idea what happened to the Levi's store on Lexington Ave. across from Bloomingdales?  It's no more"

While we like to keep tabs on prominent stores, we had no idea that the longtime Levi's flagship (pictured above) had vanished, but it turns out that another chain has taken over the space. Reason? The usual lease ending/rent hike drama that happens all over the city. it turns out that Sephora was willing to pay more than Levi's for a prime spot across the street from one of the city's most iconic department stores. The 7,000 square foot store is will be charging the cosmetics chain $700 per square foot which is as moch as anyone gets in that area and twice what Levi's last lease cost them. This will make it the 17th Sephora in New York City, and it makes us wonder of the popular makeup chain might not becoming like Duane Reade in its ubiquity. There is already a Sephora a couple of blocks downtown near 57th street. As for Levi's, losing such a large, high profile store is a blow. The area around Bloomingdale's is increasingly important as shopping area distinct from the more luxurious Madison Avenue strip a couple of blocks across town. It might be hard for the iconic denim brand to find another large space in the area, unless, of course, some other store gets its rent doubled and has to ove on —which will probably be happening any minute now.

In other missing store news, it looks like Krizia's brief stay in the Meatpacking District has come to an end. The incredible clearance sale several weeks ago turned out to be something of a closing sale. Once one of italy's brightest designer labels, Krizia has been eclipsed by newer brands in recent decades. The particular section of 14th street where its boutique (pictured below) was found —meant to replace a longtime Madison Avenue home— just under the High Line has been obscured by construction and still has not fully flowered despite being only a stone's throw from hot stores like Diane von Furstenberg. Perhaps a Krizia revival will bring the boutique back to a stronger response.