H&M Takes Herald Center
For Another Biggest Store Ever

Is It Time To End The Barneys Warehouse Sale For Good? 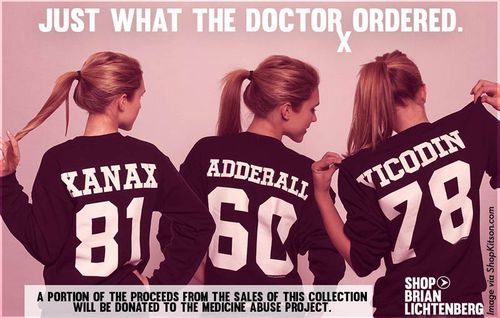 Here's something to get outraged about now that we are all sick to death of hearing about Miley Cyrus.
The history of Fashion is full of struggles with taste issues as style evolves. Are skirts too short? Are transparent clothes too vulgar? Are leggings too revealing? Do some kids wear their trousers too low? is visible underwear socially acceptable? Today, the debate took a left turn away from issues regarding body exposure to more cerebral concerns of mental health and drug addiction. This morning, "Today" show viewers were apprised of the latest exclusive line of T-shirts by designer Brian Lichtenberg for the Los Angeles boutique chain Kitson featuring the names of some of the most addictive prescription drugs emblazoned on football-style jerseys in an advertisement featuring the tag line "Just What the Docto℞ Ordered" (pictured above).
Hilarious, right? 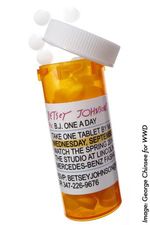 While that was going on, WWD readers who were not invited to the Betsey Johnson show at fashion week discovered that, this season, the designer decided to send out invitations in the form of a prescription pill bottle —filled with breath mints, one must add. The designer called her upcoming collection “a prescription for dressing,” and told WWD, “I have to take credit for the idea. I think getting a bottle of pills is just funny.” Apparently, the designer was not pressed with the question of whether that idea might be offensive to some.

Do you have to be a militantly sober person to find this surprising new mini-trend offensive? Consider that the fashion industry has had an uneasy relationship with substance addiction behind the scenes, with designers like Yves Saint Laurent, Calvin Klein and, most recently, John Galliano serving as just a few highly public examples. For the moment, Johnson still seems to think she made a funny joke. Kitson and Lichtenberg's T-shirts, however, have been the subject of an online furor recently, which may have prompted the store to add the notice that a portion of proceeds from sales of the shirts would be donated to The Medicine Abuse Project, an organization dedicated to preventing prescription drug abuse among teens. Lichtenberg calls the tees "a parody of pop culture", and a commentary on society, but the fact that he sees prescription drugs as a part of pop culture and not health care may be part of the problem. Of course, that particular point will probably be lost when you see someone swanning down Robertson Boulevard in an Adderall jersey, not to mention the possibility that selling T-shirts that ostensibly promote prescription medicine may not be the most constructive way to support an addiction prevention organization. "Today" reported that some prescription drug companies are considering legal action, as these drug names are trademarked brands.

Make of all this what you will, but expect to hear more about it in the immediate future. At the risk of putting on our prissy Schoolmarm Hat, we don't know exactly where the line is for these matters of taste, but we are pretty sure that these things have gone way over it.