What You Will Want To Know About The Barneys Warehouse Sale 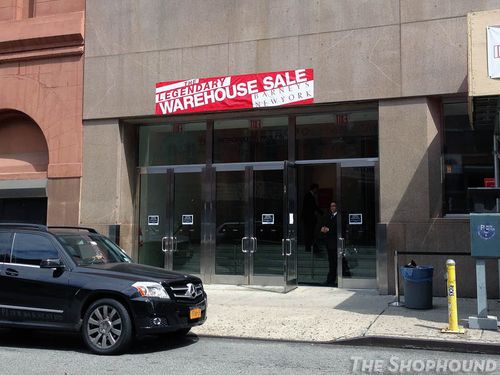 The Shophound just got back from the Barneys Warehouse Sale. This is approximately the umpteen kajillionth Barneys Warehouse Sale we have been to, but this is the first time in its new home, the Metropolitan Pavilion, where it has been moved after the closing of the 18th Street Co-op store. There are lots of questions about how well the transition has been, especially in the wake of the Barneys Warehouse website, where most of what would normally be found at the sale is now being offered via e-commerce. Here are some answers to the obvious and not so obvious questions:

Is there any womenswear?
Yes there is. Contrary to many rumors over the past six months, Women's merchandise has not been eliminated from the Warehouse Sale.

Is the womenswear any good?
Not really.
Shall we elaborate? From what we could tell, the women's merchandise consisted mostly of the kind of casualwear and jeans that made up the low end of what would be offered at the Co-op stores —which are being eliminated. Basically, it's mostly the kind of stuff that barneys is trying to stop carrying altogether. The likelihood of finding a fabulous Balenciaga or Givenchy at a bargain price is slim to none, unless you find it on one of the 75% Off Blue Star racks, of which there are a few, but offerings on these racks are random and require fastidious checking for flaws and damages. We did notice a lacy, slightly shredded Rodarte dress on the end of one of them, but it was hard to tell if the shredding was from being shopworn or just, you know, Rodarte.

Women's shoes?
We saw only a couple of racks, and they appeared to be devoted to orange tagged "as is" merchandise. The days of picking up a few Manolos or Louboutinn at this sale are definitively over. As for other accessories, there was an abundance of bags from labels like Botkier and Deux Lux which seemed like far too cheap a brand to sell at even a Co-op store and was probably brought in (by the truckload) at off-price for the sale. Now on to Men's...

How was the Menswear?
As expected, about 3/4 of the entire space was devoted to Men's apparel, and about 2/3 of that was men's suits. Tailored clothing was the main focus of the merchandise including lots of outerwear and still a good selection of the house label dress shirts that Warehoue shoppers have come to expect. It looks like the sale is still a good place to go for a deal on businesswear.

How about Men's Casualwear?
Disappointing. Where there were once racks and racks of sportshirts, then whole sections for designer collections and denim, there is now a small, condensed section with everything mixed together. Sportshirts, once an endless forest of offerings, have been reduced to four rolling racks. Casual pants and denim have also been similarly reduced in scope, and sweaters seemed to be mostly limited to private label items and house brands like Piatelli. Much like the women's section, it looks like the designer merchandise we used to find at the Warehoue Sale has been largely diverted to the website. There is a larger Blue Star section as well here, which can often be a source of rock-bottom deals, but the offerings are a bit random from previous seasons and, again, require careful inspection for flaws, damages and possible alterations.

Men's Shoes?
Also pitiful, but then the men's shoe selection at the Warehouse Sale has been poor for the past several seasons. Now it's worse simply because the selection is even smaller and consists mostly of questionable private label and house brand styles. There may be an errant Prada loafer or Margiela sneaker popping up here or there, but they are anomalies.

Was there anything from the Home Department?
Yes, but so little it hardly seemed worth the bother for them to even put it on the shelves.

How's the space?
Here's some good news: The Metropolitan Pavilion's ground floor space is spacious and much easier to shop than the old location. There are no annoying stairs and everything is on one level. Checkout seemed to be moving swiftly and there was enough room for actual changing areas! This is something we have never seen at a Warehouse Sale, where one would have to be prepared to strip down in a corner to try things on. In this sense, the change in location has been a definite improvement.

So to sum it all up, The new Warehouse Sale is easier to shop, but aside from Men's tailored clothing and furnishings, you may have to hunt long and hard to find anything you actually want to buy. If you are a lady, you probably won't want to bother at all. There may well be a bargain or two hidden in there for somebody, but finding it depends a lot on how much patience one has for that kind of foraging. Have a look at our gallery below to get a better idea of the scene. In general, this version of the sale is not something we would saving our money for or even particularly looking forward to, but all it takes is one or two good finds to make a visit worthwhile. The question is, how much work should it be to find them? 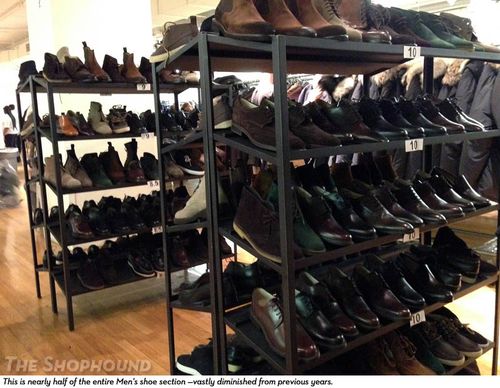