Is It Time To End The Barneys Warehouse Sale For Good? 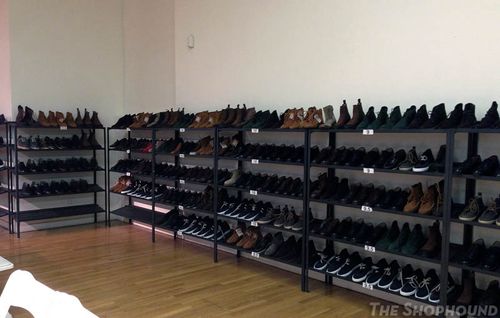 Yesterday, The Shophound stopped by the Barneys Warehouse Sale to see if, as in seasons past, additional markdowns had been taken. As of yesterday there weren't any, but we did find the sale space somewhat re-arranged for easier shopping. Note the picture above, where you can see the men's shoe section neatly arranged, and incredibly tidy looking mainly because there were hardly any customers there to mess it up.

In the day or so following the opening of this season's Warehouse Sale, lots of bloggers, The Shophound included, weighed in on this new, relocated version of the popular event, and reached a general consensus that it was vastly diminished, even more so than in recent seasons when shoppers already complained that it was not the trove of bargains it once was. Of course, the most important response was not to be from critics and bloggers, but from the customers who be spending their money at the sale, and, at least on the two occasions when we have stopped by this season, those customers have not been in evidence. Yesterday we breezed in and out in minutes and saw only a handful of shoppers perusing the sale. Even on the first day, crowds were pretty thin. Perhaps everyone is still waiting for more markdowns, but usually those would have been posted long before the seventh day of the sale. So far, there have been no added reductions.

It would really be OK if Barneys decided to stop holding this sale every season.
At this point it's looking like a sickly pet that nobody has the heart to put out of its misery, or that last season of Laverne & Shirley that didn't have Shirley and barely had Laverne. Since the best merchandise is obviously being diverted to the Barneys Warehouse website (for perfectly smart business reasons, we might add), what is left at the Metropolitan Pavilion this week has been mostly picked over dregs, aged merchandise and some women's offerings that are clearly off-price goods brought in specifically for the sale and never meant to be seen in a regular Barneys store. Calling it the "Legendary" Barneys Warehouse Sale, as the banner above the entrance does, is kind of laughable, now. Continuing to hold this watered down sale can only hurt the Barneys brand, so end it already. It's OK.

Previously:
Warehouse Report: What You Will Want To Know About The Barneys Warehouse Sale