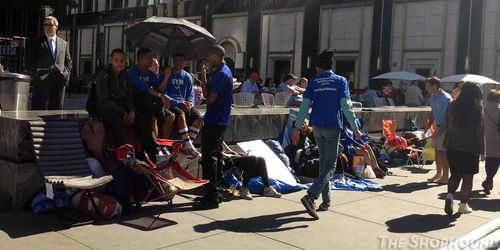 In case you have been spending the last few weeks of Summer under a rock, you probably know that two new iPhones are being launched to day at Apple stores and authorized dealers today. When we passed by yesterday afternoon, the people in the picture above had been waiting in line outside the Fifth Avenue Apple store for a couple of days so they can be among the first to get one of them. They can politely be referred to as a bunch of dum-dums, because there were literally tens of people in line behind them. And not that many tens.

Don't be caught in an iPhone line. This time last year, Apple devised a reserve-online-pick-up-in-store system that essentially abolished all iPhone lines, and it worked well enough that we managed to get ahold of one within the first week of the launch without the slightest bit of trouble or waiting.
So don't fell the need to wait in line for an iPhone, and if you see anyone else doing it, throw a pie at them.