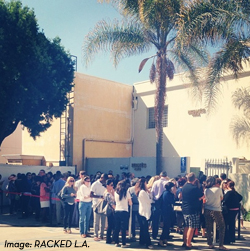 The scandal of the week is that the offerings at the big Hermès Sale have fallen far short of reasonable expectations, even as eager shoppers and fans lined up for hours in the early morning to get first crack at the otherwise rarely reduced handbags, scarves, ties and other items that failed to materialize. Hermès business has been booming for the past couple of years, which usually means a greater production level and ultimately, more abundance when it comes to clearance and sample sales, but not this season for some reason.
The Madison Avenue Spy seems to have gotten to the bottom of this mystery, and offers a warning for future events. It seems that in advance of unveiling its newly renovated Beverly Hills flagship, the folks at Hermès decided to collect all the overstock and past season goods from their North American stores and hold a huge blowout sale in Los Angeles last month that included all the stuff that shoppers were expecting to find at the sale that opened here this week.
Of all the nerve!
According to reports from Racked L.A., it was total pandemonium as shoppers devoured all of the bags, scarves, ties, enameled jewelry and fragrance available. None were left when it was time for the sale here, what there was had already been pretty picked over, and thus the offerings this week have been disappointing at best. It was bad enough when we had to start sharing the old Barneys Warehouse Sale with L.A., but now this?

Will next season bring a return to the kind of Hermès sale that shoppers have come to expect? Hard to say, but the M.A.Spy tells us that the store in Houston, another major location for the brand, is getting ready for a big relocation. If Hermès has decided to use its big sale as a traveling show to help promote new stores and renovations, then the big clearance events that New Yorkers now feel entitled to (and obviously deserve!) may be a thing of the past.

Why the Hermès Sale Was a Bust (Madison Avenue Spy)
The Hermès Beverly Hills Sale is a Glorious Madhouse (Racked L.A.)

Posted at 10:31 AM in Hermès, SALEsaleSALEsaleSALE, Scandal! | Permalink | Comments (0)