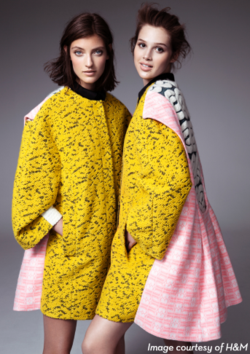 There's a truckload of news coming out of H&M today.
First on deck is the unusual occasion of H&M selling its wares in another store, and the impressive surprise of that store being New York's epicenter of directional design, Opening Ceremony. The Swedish chain's 2013 Design Award winner, Minju Kim will debut her collection (pictured at right) at select H&M stores on October 17th as well as at Opening Ceremony's New York, Los Angeles and London stores. It's the first time that H&M has partnered with another retailer, and Opening Ceremony's participation suggests that this new designer will be someone to watch. Born in Korea and schooled at The Royal Academy of Fine Arts in Antwerp, Belgium, Minju's manga-inspired collection was selected by a jury of fashion experts, and in about three weeks, you'll get a chance to see it for yourself.

The next bit of news concerns H&M's more sophisticated and expensive brand COS —which stands for Collection Of Style. Heretofore unavailable in the United States the brand will make its stateside debut sometime next year at an as yet undisclosed location somewhere 129 Spring Street between Greene and Wooster Streets in SoHo. No word yet on how big or extensive the store will be, but it's website —which does not ship to the U.S.— shows collections for Women, Men and Children. Hopefully, more details will emerge soon.

And lastly, this week has seen excitement for the upcoming Isabel Marant pour H&M collaboration collection increase exponentially as images of the offerings mede their way onto the internet via a variety of blogs and websites. Today, GQ was the first to present a detailed imagery from the men's section of the capsule collection including prices. They are Marant's first men's designs, and probably the only ones you will see from her in a while. The good news is, they translate the designer's eclectic boho vibe quite well for men including great outerwear pieces, jeans that are embellished just enough, and some easy tees and sweatshirts. The bad news is they won't be cheap. The jeans are $99, the terrific brass buttoned peacoat is $299, and the suede ankle boots are $199. The prices are in line with last year's ill-fated Maison Martin Margiela project. While we hope Marant's collection does better with shoppers than that one did (and it looks like it probably will) H&M wasted no time in marking down excess Margiela merch within a few weeks of the launch. In the event that guys are not quite ready for Marant's chunky sweaters and skinny, decorated jeans, more adventurous shoppers with paitence may find some bargains.
Have a look at more of Minju Kim's collection and some of Isabel Marant's key men's items in the gallery below. 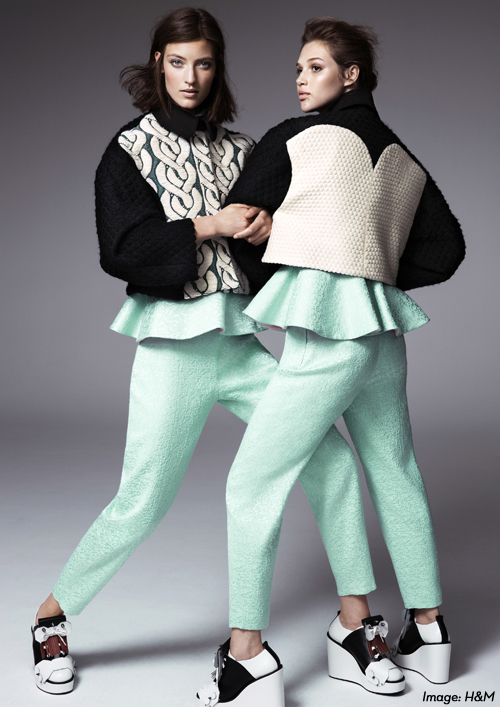